Yes we dig holes too

The back foyer/mud-room on the house started out life as an open deck. Someone along the way closed it in. I rebuilt it six years ago and changed the roof line from a dish-pan to a proper peak. The foundation posts were plain three inch by four foot steel pipes set on a flat rock about three feet down below grade. That is how they rolled 75 years ago. Last year I noticed the steel posts were starting to rust out at ground level. 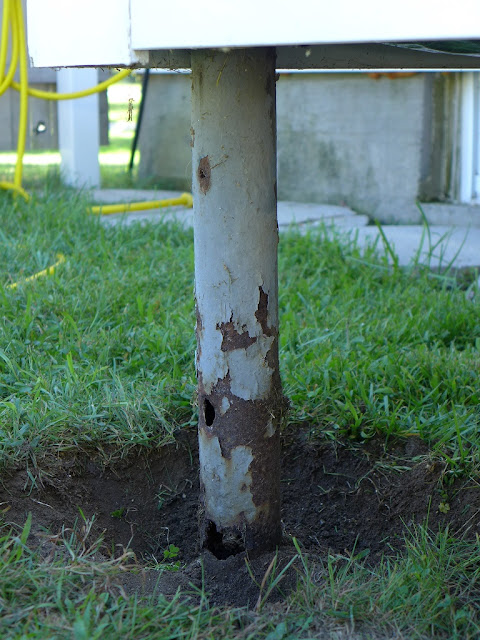 I guess its a year for repairing rusty things. Including my truck, but more on that one in a later installment. The door to the foyer kept shifting so the bolt would no longer line up with the striker and it changed with the seasons. This meant that the whole structure was shifting. So a couple of weeks ago I figured it was time to do something about it and fix it right instead of moving the door striker with the seasons. 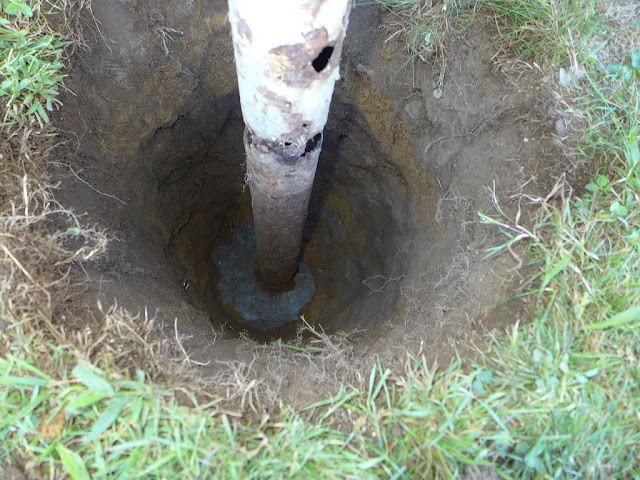 Time to dig it out and see how bad it is and learn what really is holding up the foyer. 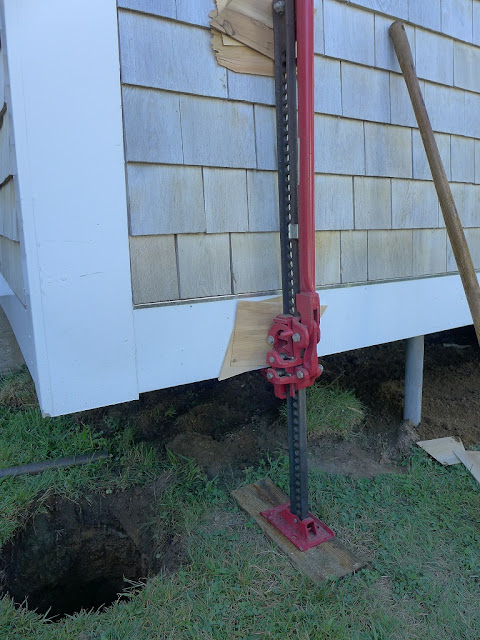 The cheap Chinese copy of a Hi-Lift jack I bought at Tractor-Supply a few years back for about 25 $ comes in handy to level and hold the building while I take out the rotten pipe. 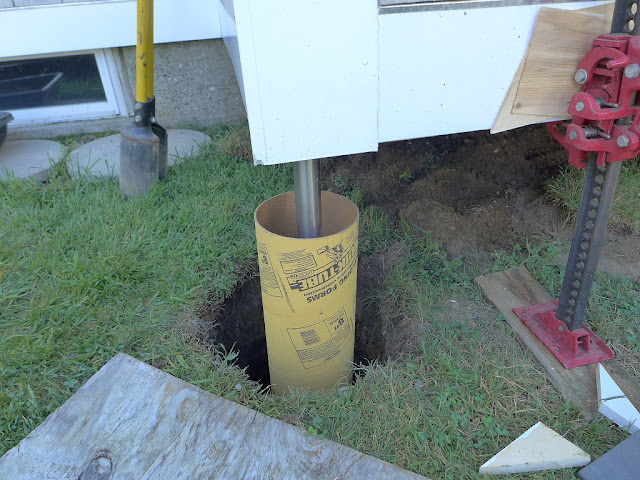 Install a new steel pipe with an eight inch Sonotube cardboard concrete form around it. For added protection and good looks I sleeved the steel pipe with a piece of stainless steel tube salvaged from some old pool stairs I had in my junk pile behind the barn. 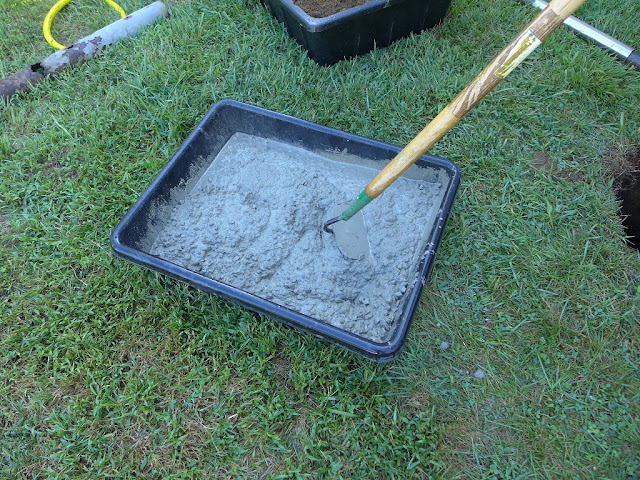 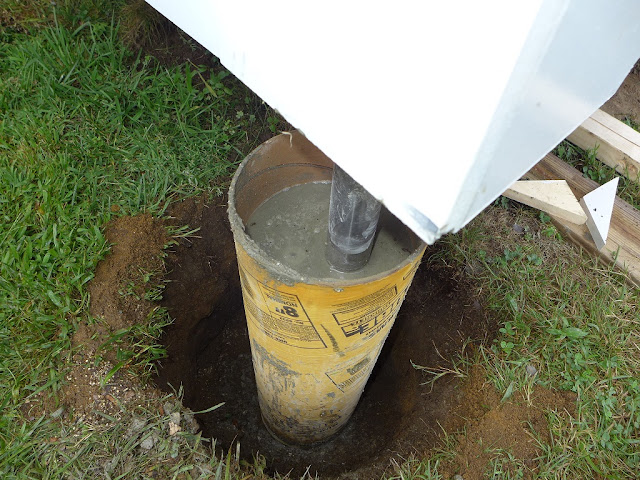 . . . and fill the Sonotube. Note the concrete footing I poured at the bottom before fitting the pipe and Sonotube. This should keep the ground frost from moving the concrete column in winter. 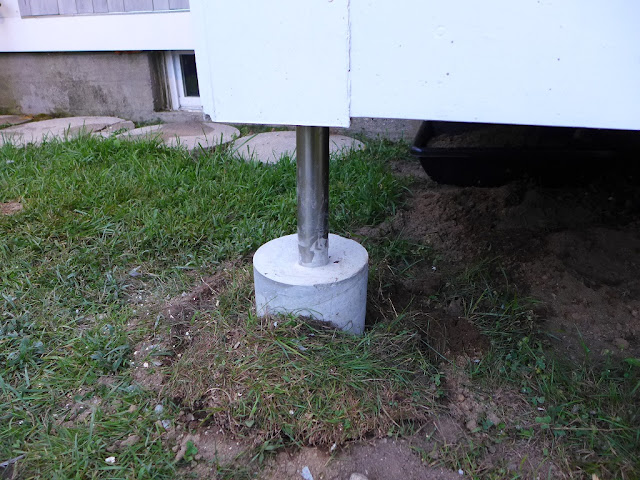 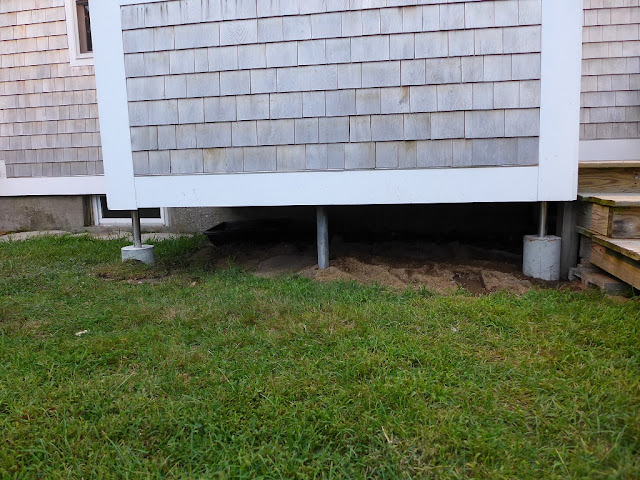 There, that should hold it for another 75 years. I left the middle one alone as it is galvanized and has not rusted. 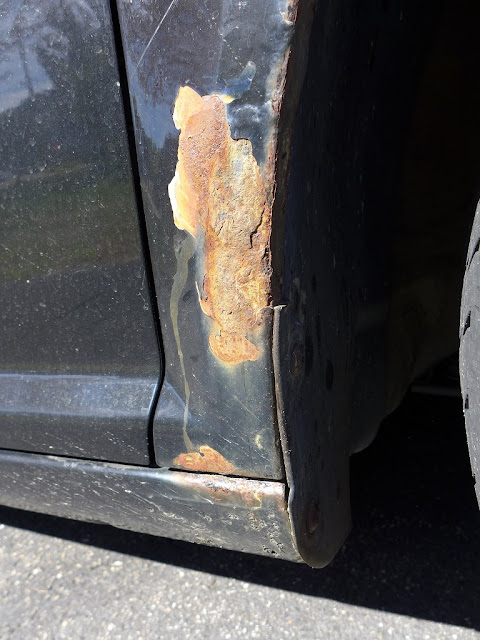 Last spring when I was washing off the winter grime some of the paint came off the lower end of the fenders on my wife's VW. Seems they were rotting out from the inside. So on Saturday I figured it was time to tackle the nightmare. Why does this happen? Piss-poor design. The plastic wheel well liner traps sand and mud behind it. That layer there is about twelve inches tall and about an inch thick. And you don't know it is there until you remove the wheel and the wheel well liner. 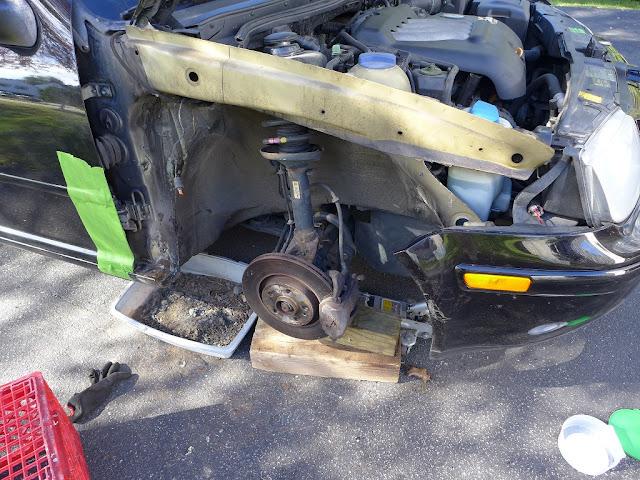 Time to get serious and yank the fender to work on it properly and clean the front end of the rocker pannel. 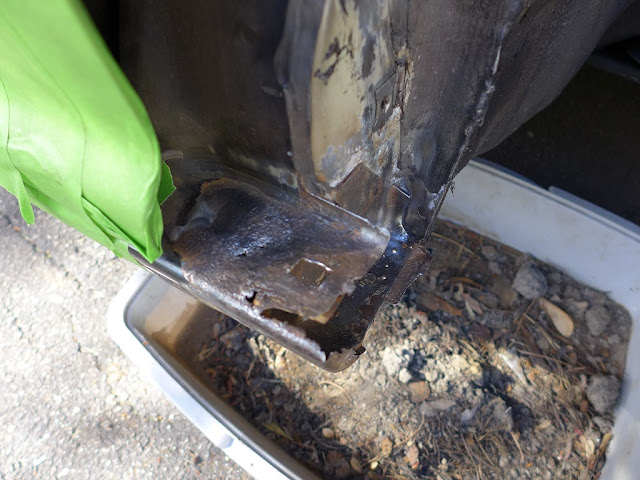 Which was also quite corroded 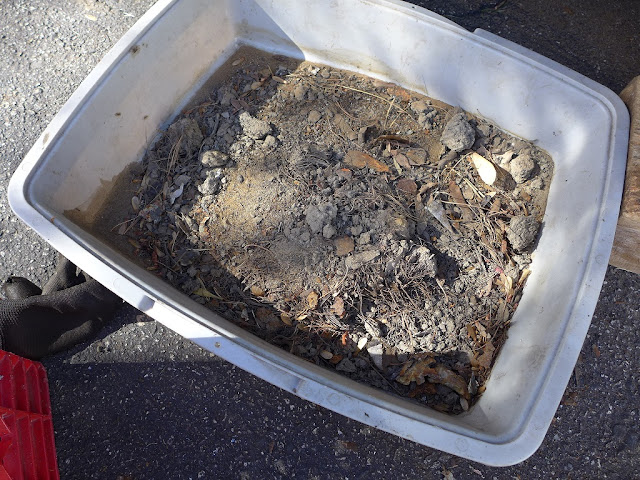 That is what came off the passenger side fender 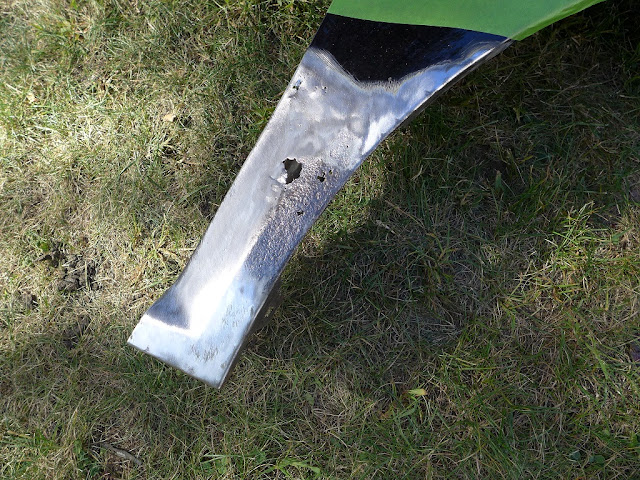 A couple hours work with a steel brush on a drill gets me to bare clean steel. 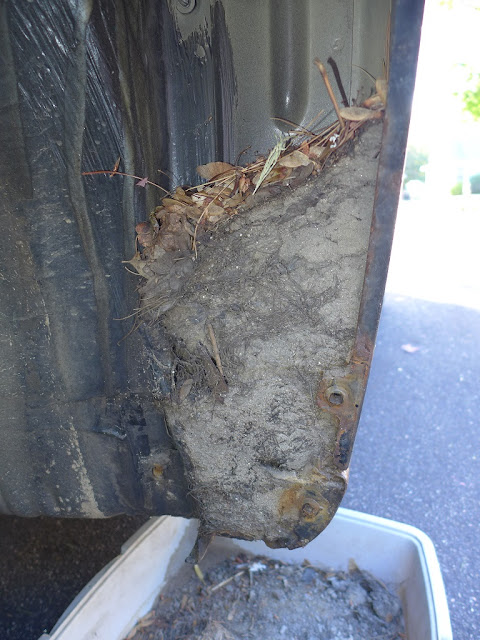 And the driver's side looks just as bad so it gets the same tratment. 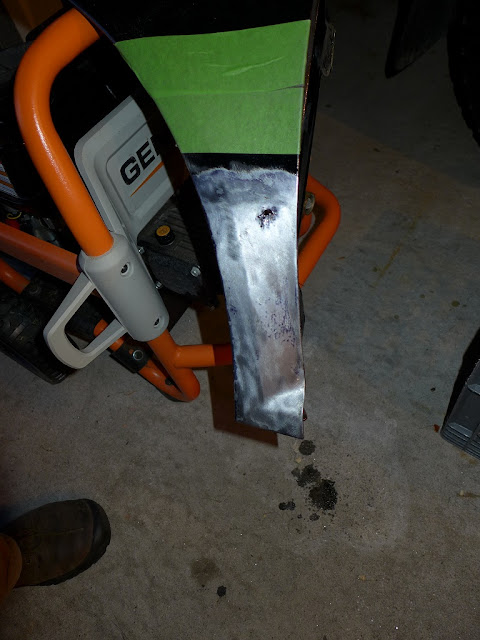 Remove that fender too, and grind on it for a couple hours, mask it off and hit it with Permatex Rust-Prep from NAPA. Essentially phosphoric acid in a spray can. Turns all remaining rust in to magnetite an inert element that won't rust. 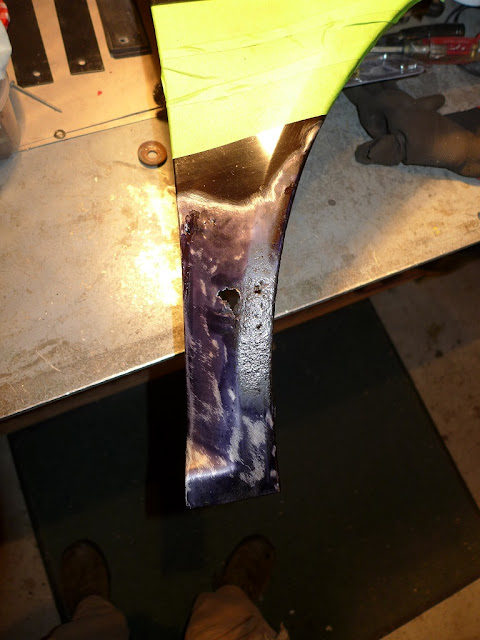 Passenger side gets the same treatment. Note how it turns black. That is the magnetite part. 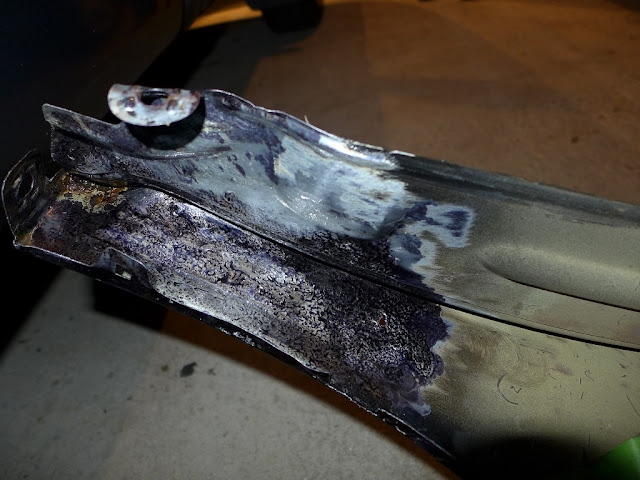 Inside of the fender gets the same treatment.. good enough for Saturday. Time to call it a day and let the rust converter do its thing. 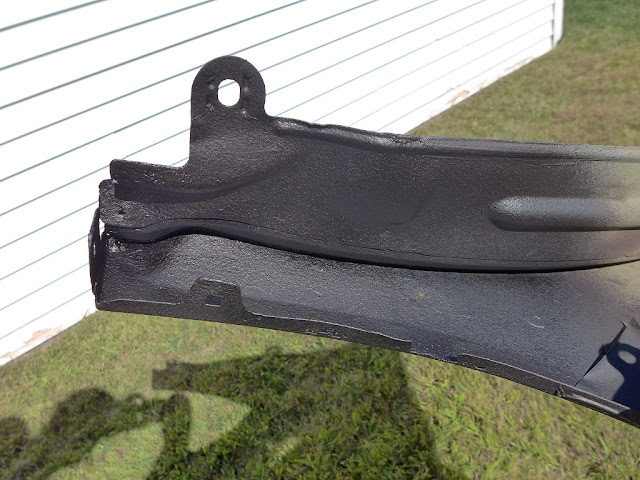 Next morning hit the inside of the fender with self etching primer and then rubberized undercoating. 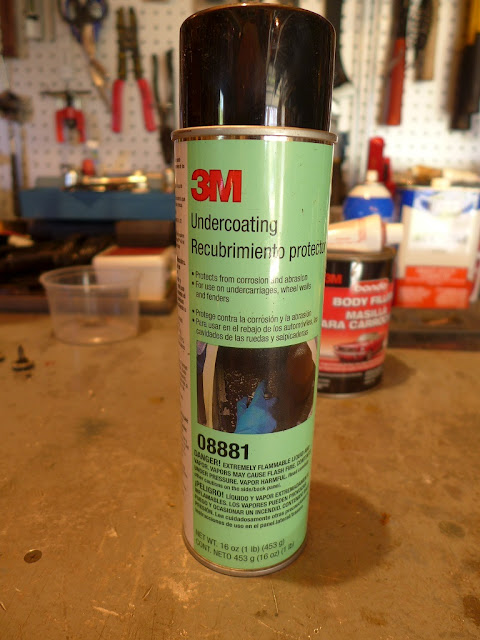 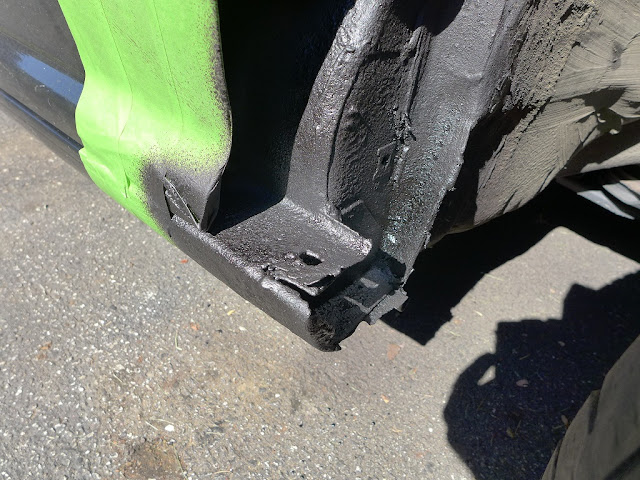 Rocker panels get the same treatment 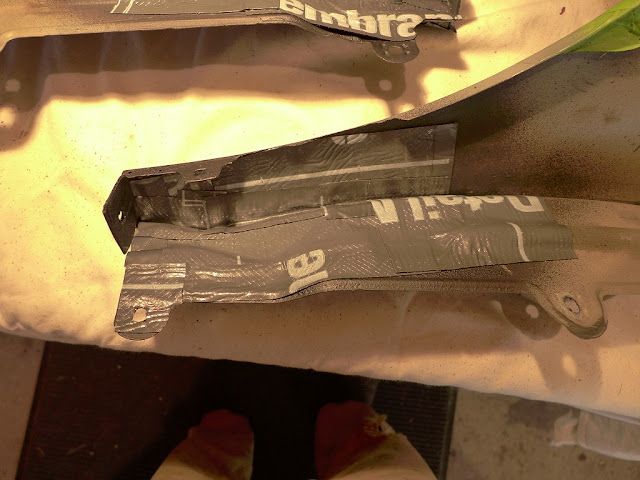 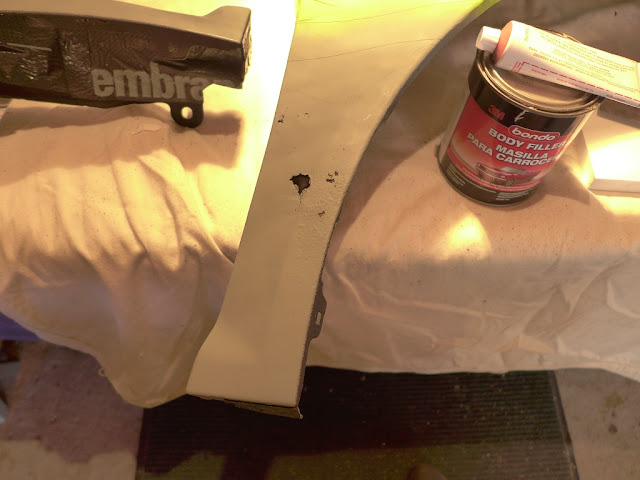 Which while adding some more protection inside, provides me some backing on the Swiss cheese steel to . . . . 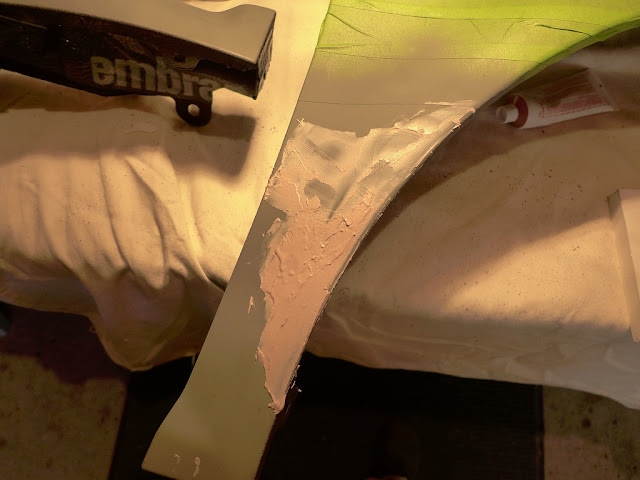 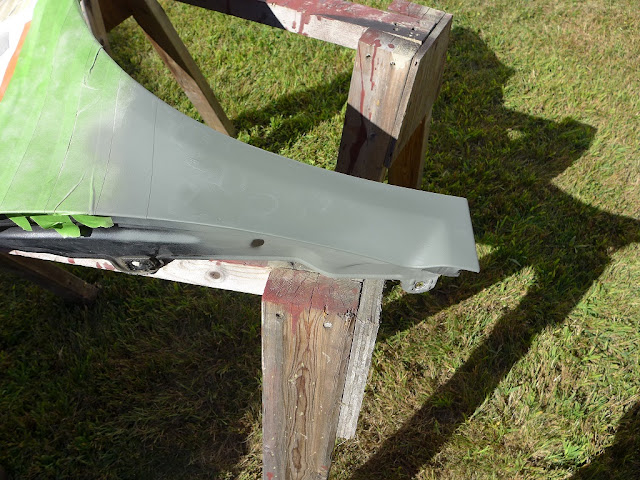 A bit of sanding and some gray primer makes it look good enough . . . 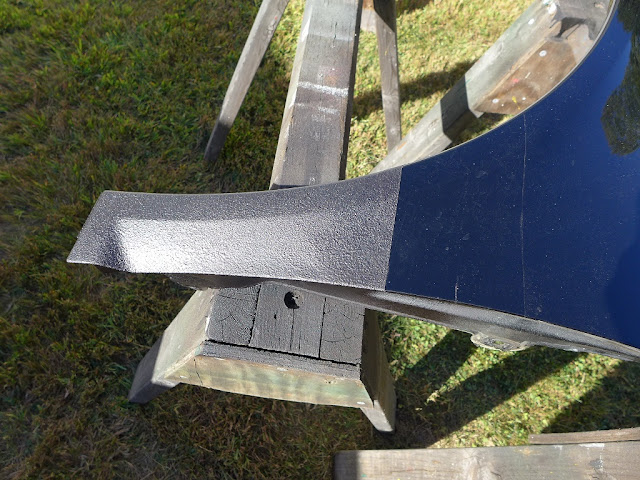 To coat with some more rubberized undercoating. 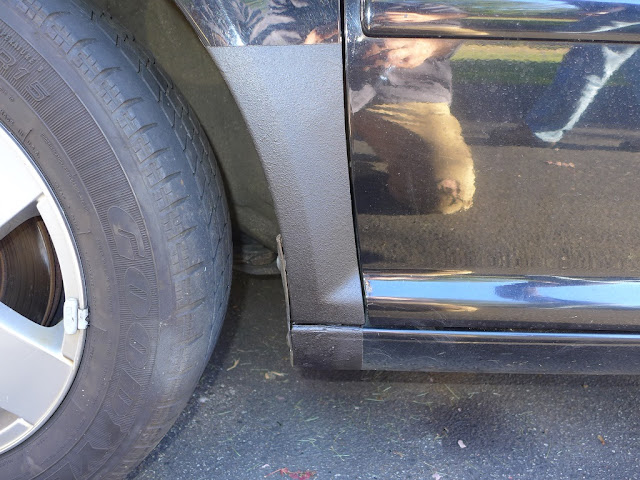 Sunday 5 pm got the refinished fenders installed and adjusted so all trim lines look even. There that should hold for a while. Don't know what a body shop would have charged for the job but I figure that it makes a fairly decent 13th anniversary present for Annie. 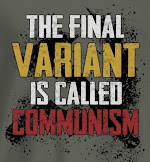 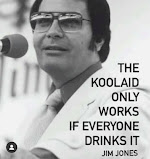