Getting thrashed like a rented mule in the hot sun

A project came to me recently that apparently no one else would tackle . 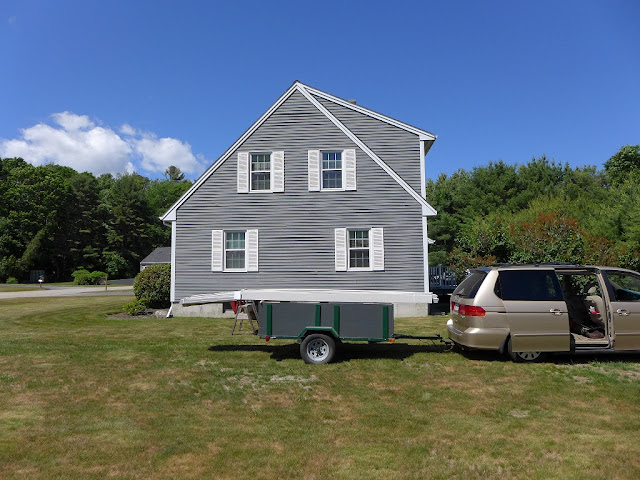 The cedar clapboards on south facing wall of this house built in the early nineties were having some issues . A lot of the siding was curling off the wall , and needed replacing . Seems that the original builder did not bother to nail the siding in to the studs , and most of the nails were simply in the sheathing . So twenty five years of weather were taking their toll on it . So after coming up with a price estimate , I got roped in to doing the job . So last Monday I bought and delivered eighteen hundred dollars worth of new premium grade pre-primed cedar clapboards . 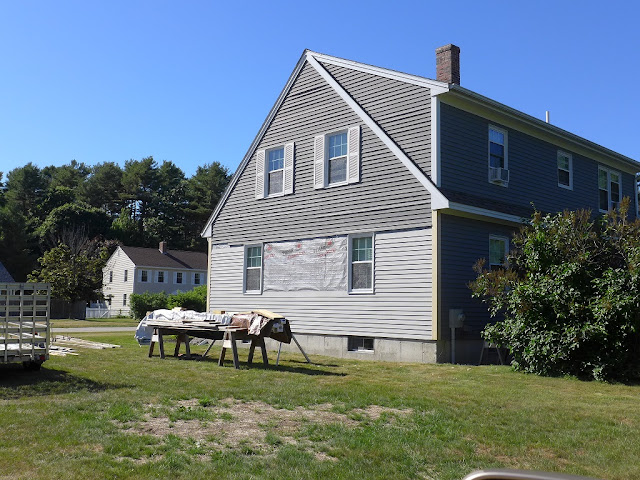 By the Tuesday we had the bottom stripped off and resided . It was about ninety degrees and about sixty five percent humidity. Not fun at all . Got burned to a crisp too , as I forgot to bring any suntan lotion . 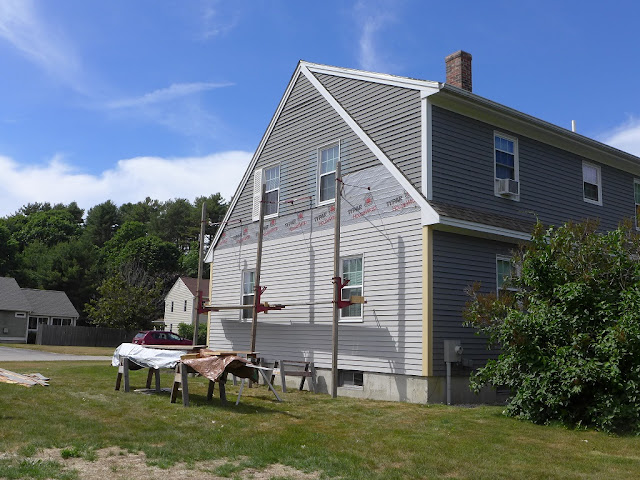 Wednesday was also a slow going and we did not get that far . Got the pump staging set up and made it to just above the first story windows . 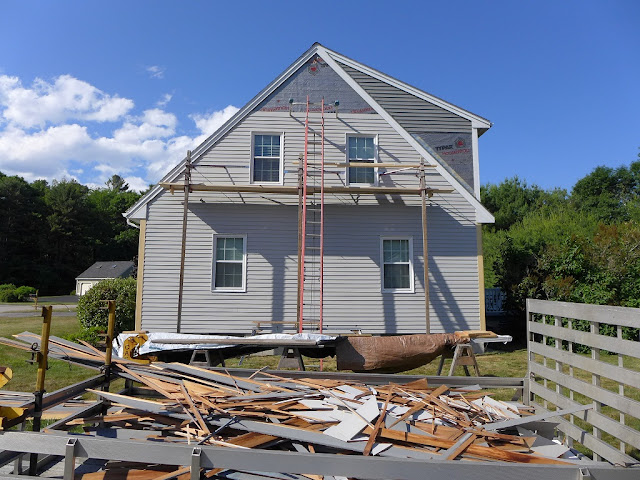 By Thursday afternoon we got above the second story windows . 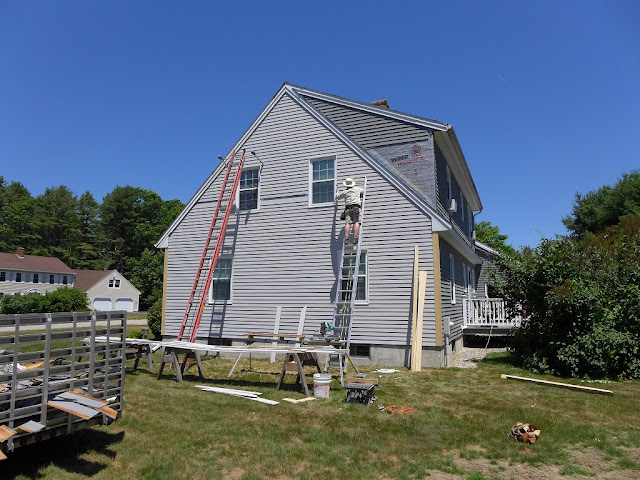 Friday we got beyond the use of the pump staging , so I took it down first thing in the morning , and used the ladders instead . By noontime I got the peak on the gable end done . That's my friend and helper for the week , Jonathan filling in a clapboard we had left out for the pump staging braces . 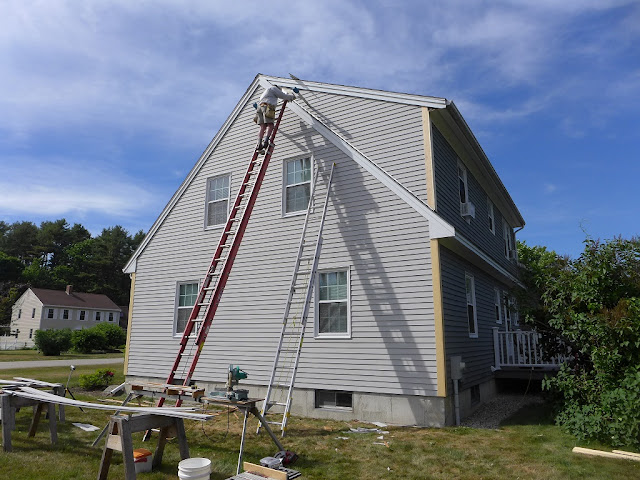 Friday afternoon we tackled the dormer side . Did I mention I hate heights ? That's me about twenty eight feet in the air . I had to struggle real hard to overcome my sense of vertigo and keep pounding away in the blazing sun while the occasional horse fly  tried to bore a hole in my leg . 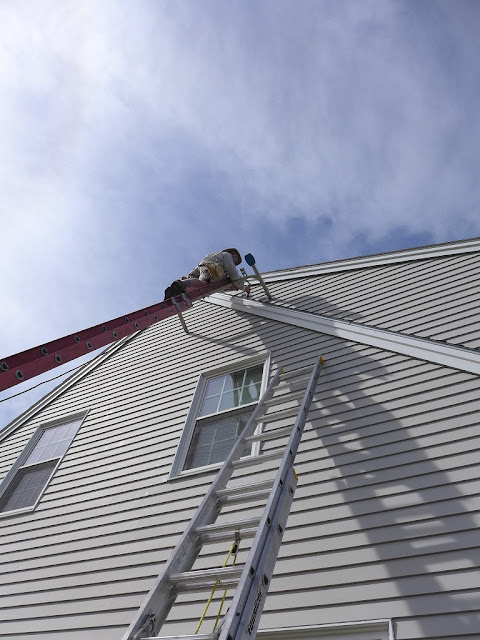 It don't seem that high from down below , but I can assure you , from up above , it looks like a long way down to the ground . 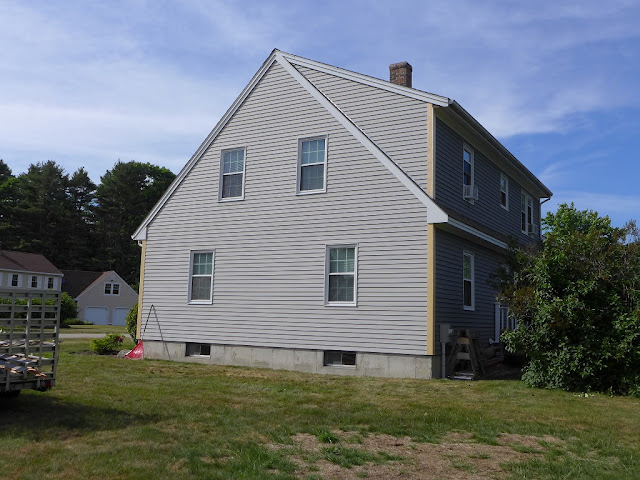 By four thirty we had it all done and cleaned up . Someone please kick some sense in to me the next time I agree to take on such a project . I am way too old for this sort of monkey business . And right  now I am sore all over and my body aches like a thrashed rented mule .

Went to see a man about a tractor

My friend Benjamin has been looking for a tractor to mow the eight acres of fields he has . Since I have been playing with dad's old 1952 Ford 8N he sought my advice on the matter . After a week of perusing Craig's List we narrowed it down to a couple and agreed to go look at the closest one in Freeport on Saturday . 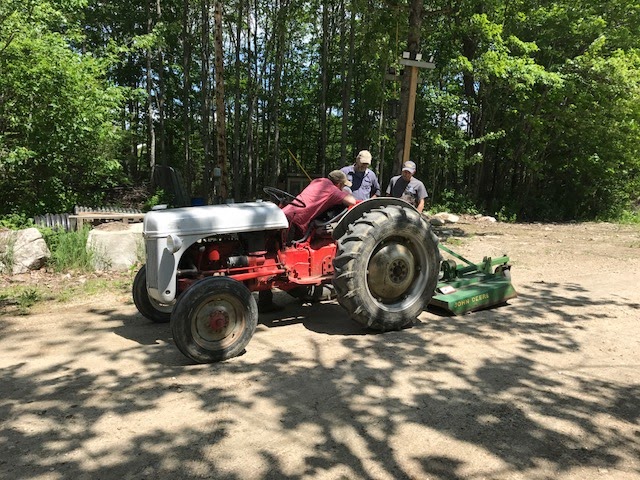 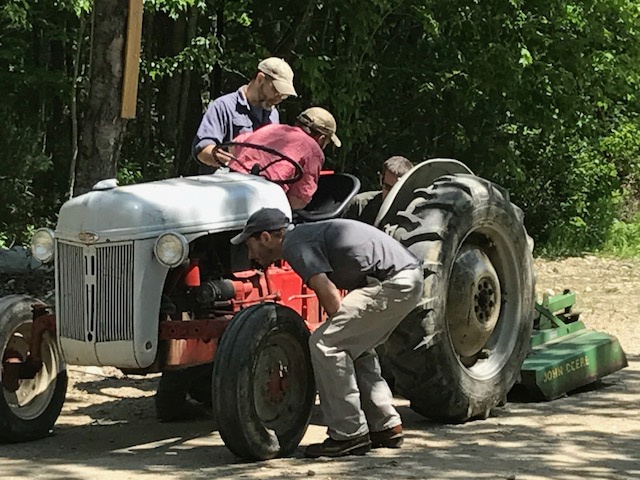 Ben gave it the once over while I discussed the particulars of the brush hog with the sellers . 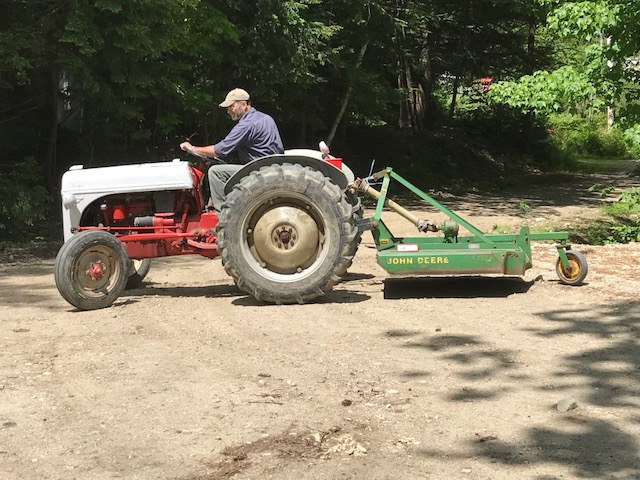 Took it for a spin after unhooking the PTO drive shaft  so I could work the three point hitch without flinging rocks at the audience . 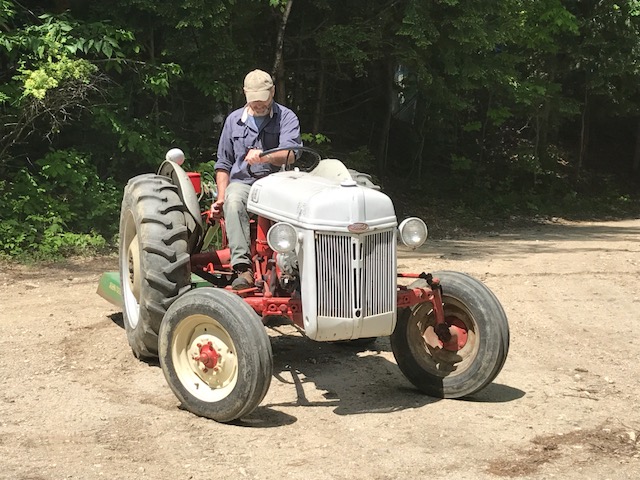 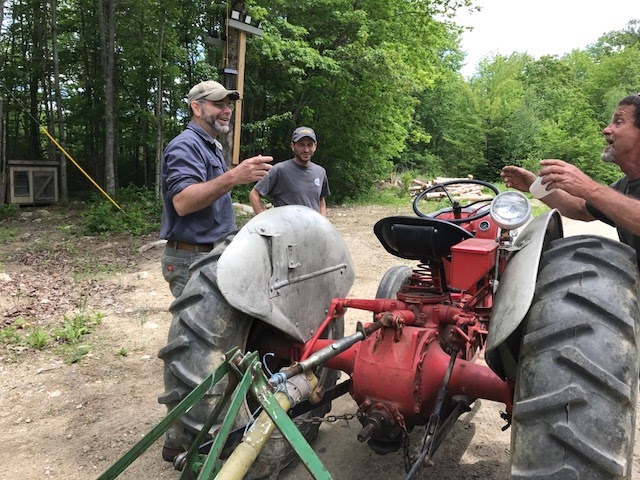 I asked the boys if they had a means to deliver it up to Richmond for Ben and they agreed to throw in the delivery for the $2500.00 asking price along with a three point hitch skidder post and some additional accoutrements . Trading tall stories and shooting the breeze with the sellers , we learned the tractor actually used to belong to Charlie DeGrandpre at Wolfe's Neck Farm just down the road from mom and dad's . Thus making it the exact tractor that inspired my dad to buy ours . With that sign , and given I could find nothing wrong with it , I knew this was The One , and advised Ben that he should buy it .  But he wanted to go look at a Farmall up in Phipsburg next so we left without an agreement , and after swinging by mom's place for a short lesson on ours , Ben went off to Phipsburg . 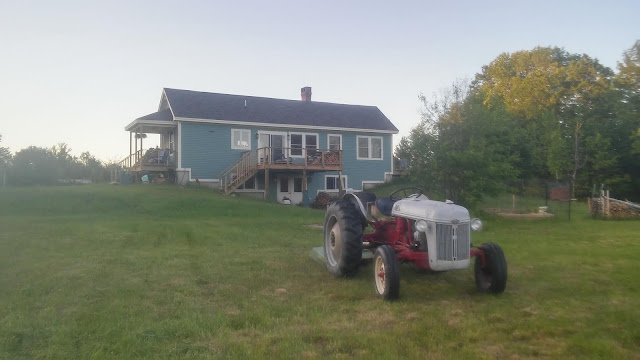 But by next morning I had an email in my inbox with this photo of it sitting in front of Ben's house .