A quick run up to Bowman field 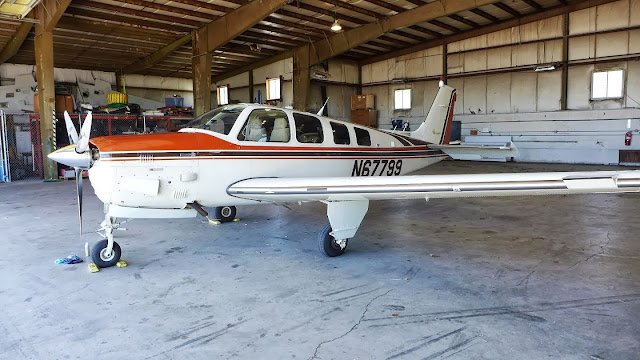 So on Saturday when we had plans to drive up for the annual Bowman field fly-in in Livermore Falls and Clint called to go flying a change of plans was in order. Unbeknownst to him his daughters and mother in law had a surprise 25 yr anniversary planned  for him and thus he had orders to leave and go play with the planes but be back at home by 4 pm. Being the best man at his wedding I was in on the surprise party part but was obviously made part of the distractions as well without even knowing it. Clint brought the Citabria down from Brunswick where the partners he shares it with keep it and we met at Portland airport as usual for some fiddling and polish work on the Bonanza spinner. 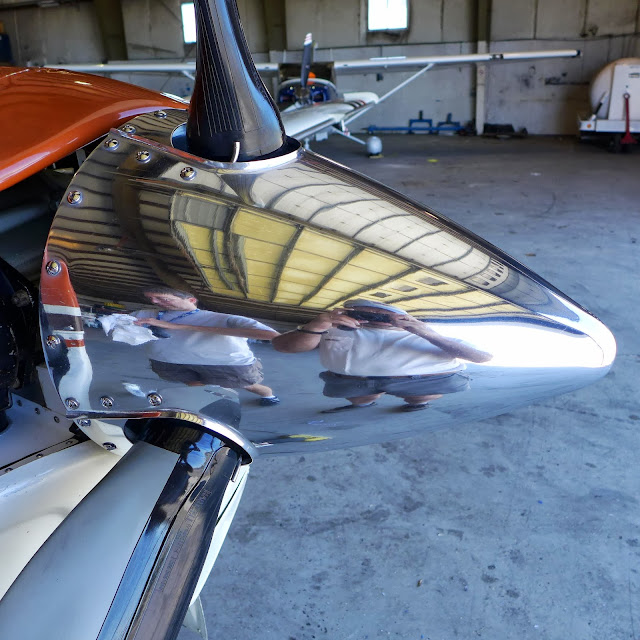 And we got it gleaming like never before. Then it was off for some fun in the new Decathlon 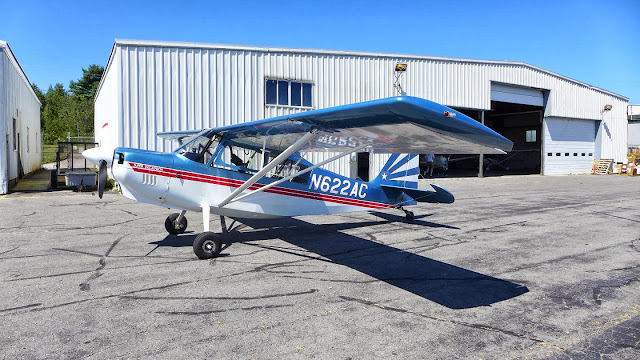 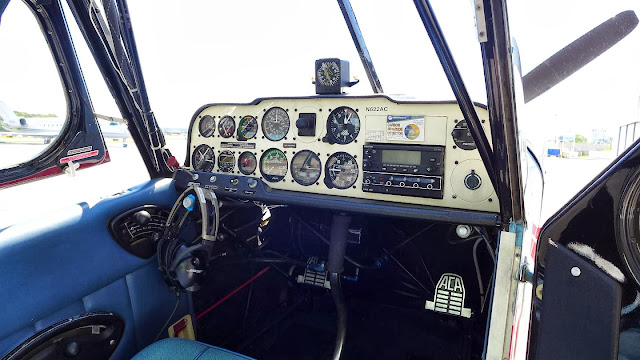 and the view from a bit further back. 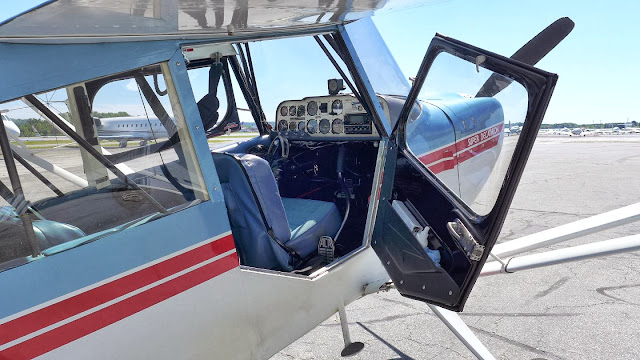 We hoped in and after what seemed a rather anemic start the engine came to life and we got our clearance to depart. 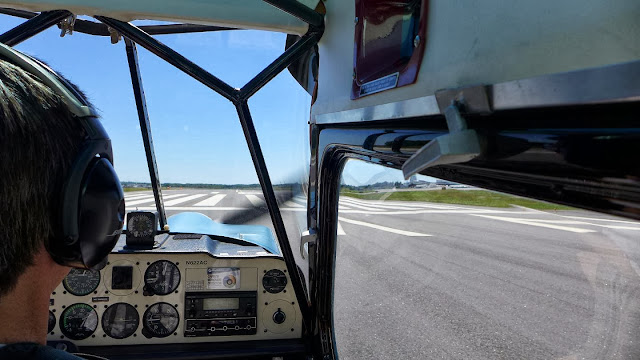 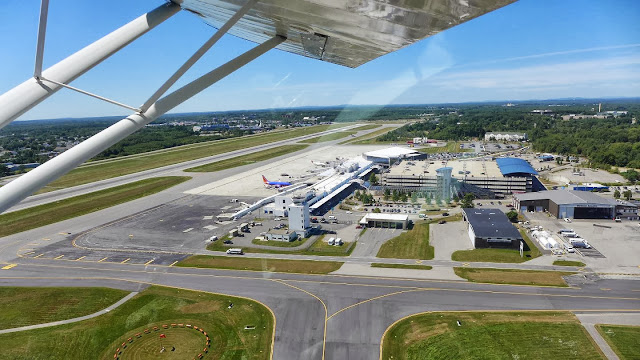 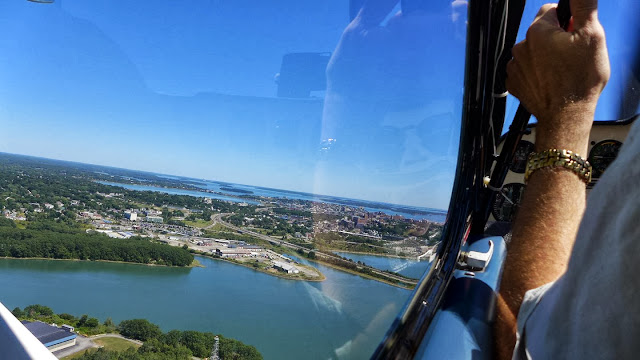 Climbing out over the end of the runway we may a turn to the north with the Portland peninsula in view. 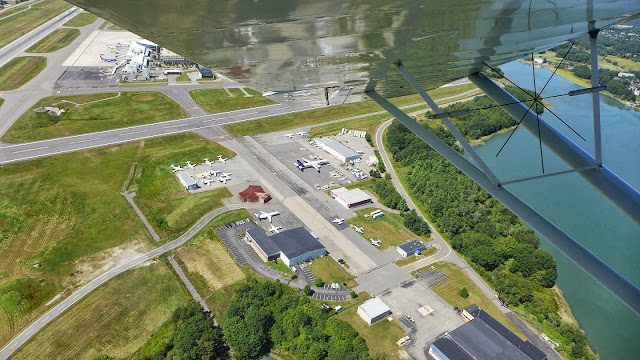 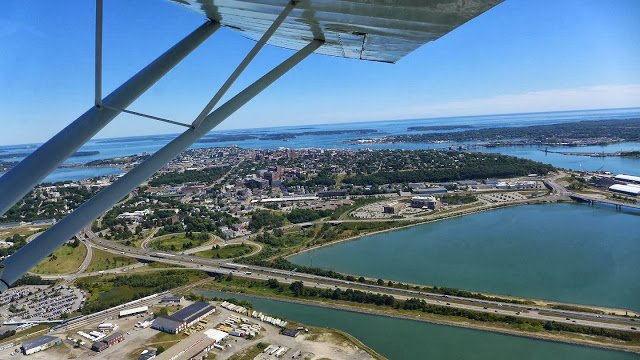 an other shot of Portland down town. 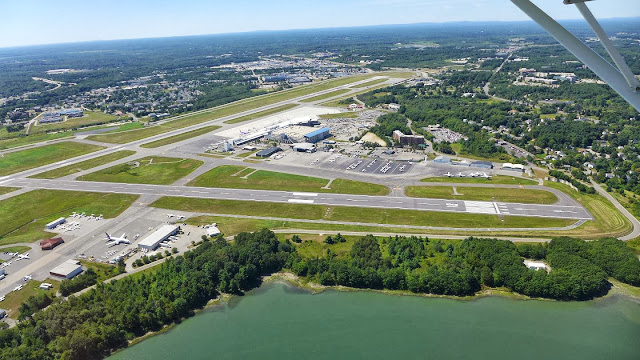 as we parallel RWY 18  we just departed from 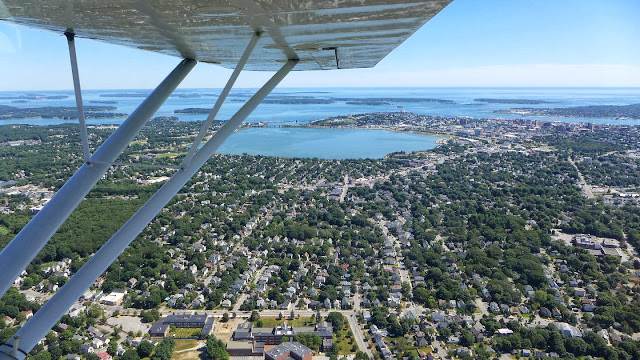 make our way past Ocean Ave with a nice view of Back Cove and the islands beyond. 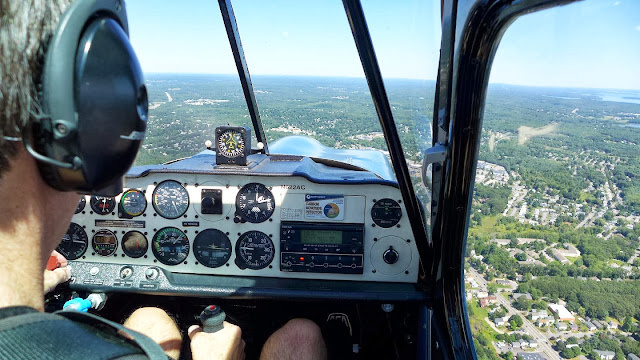 this is what the view from the inside is like. 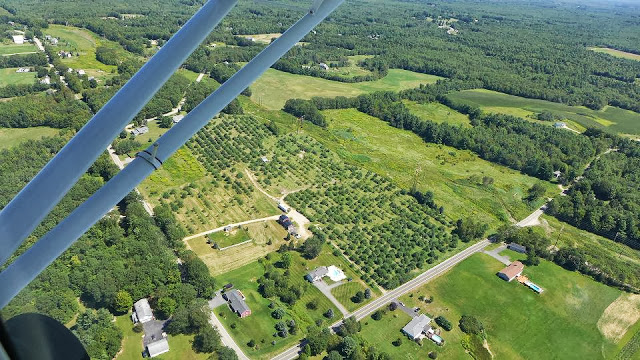 making our way up towards Lewiston we fly over some nice apple orchards. 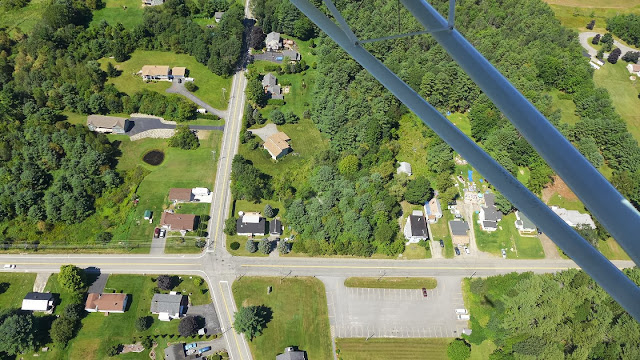 we fly over Mother Bergeron's house were the evening festivities are to take place. If you look closely you can see her waving at us in her driveway. (the house with the tan roof in the middle of the photo) 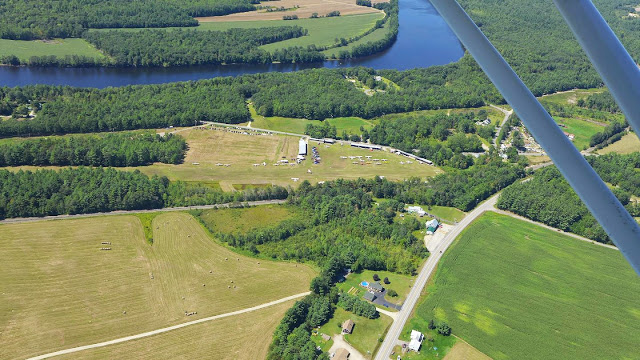 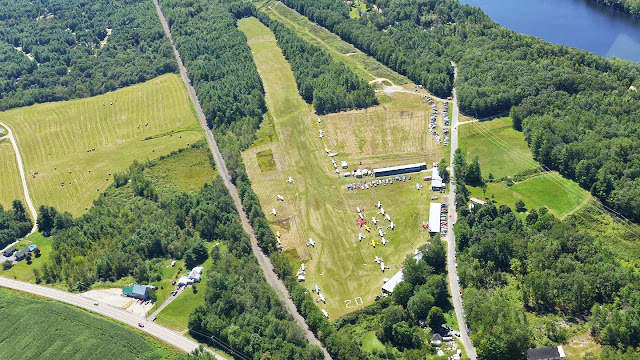 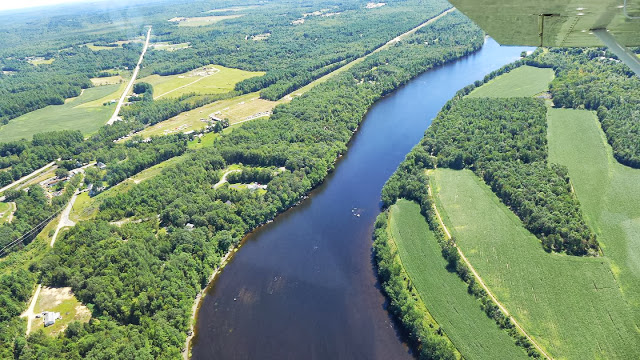 down wind for RWY 02 over the river 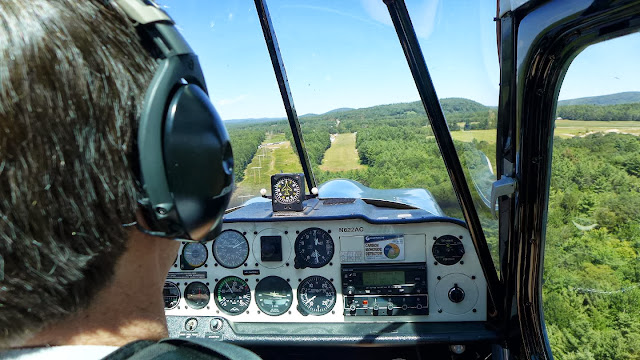 Base to final for RWY 02 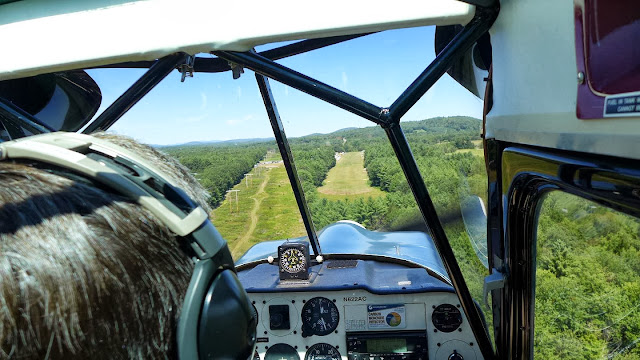 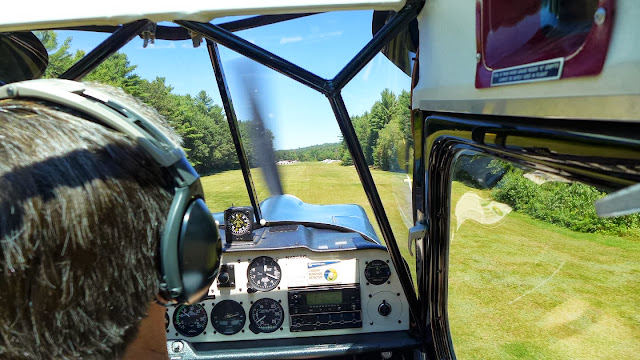 flaring just about to touch down 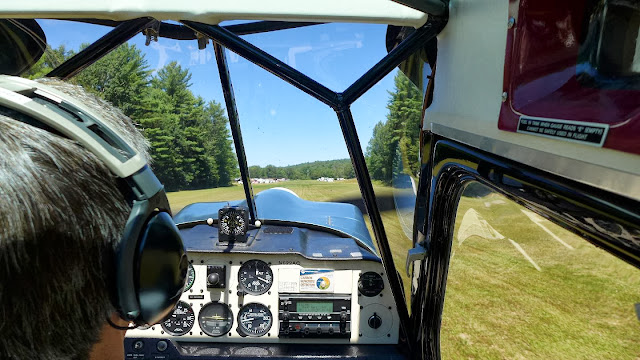 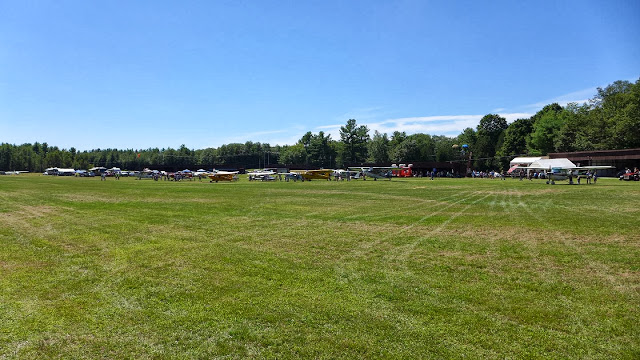 We meet Marty, chat for a spell with Dan Grey, have a quick burger and take quick stroll across the field. Hearing the announcement for the candy drop we try to make our exit before they close the field on us. Unfortunately it appears we have a dead battery due to what we think is a faulty alternator and she won't even click. I knew it sounded kind of weak when we started at KPWM. So the field coordinator offers a hand-prop which we most happily accept and after about a dozen attempts, including flooded engine procedure the newly rebuilt, high compression 180 hp engine roars to life. We are most grateful for the assistance offered by the field coordinator. 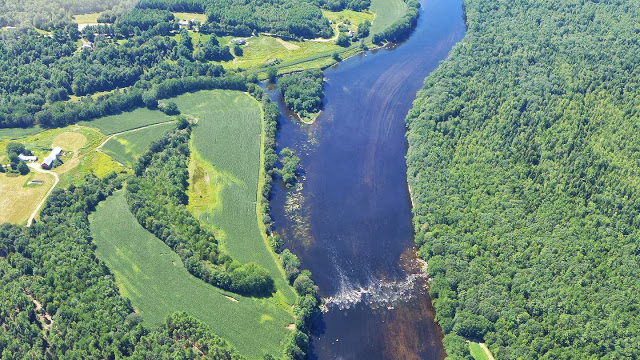 And we beat feet to depart before the 1/2 hour field closing for the candy drop. 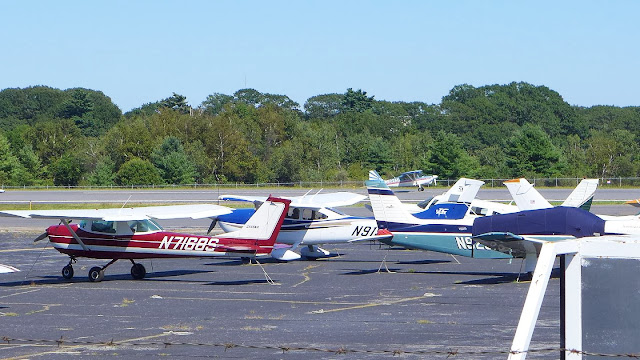 So that Clint could be home by 4 pm as ordered we made a dash back to Portland were for fear of being unable to restart it we don't even shut down to let me out and Clint heads back to Brunswick to park the plane.

The evening anniversary party was a total hit. Clint and Colette just thought they were coming up for a regular family thing at Mother Bergeron's. So when they walked in and found nearly 40 of us there they had quite a surprise. It was nice to be in the company of friends I had not seen in some time, and a privilege to once again be a part of a milestone for a dear couple of friends that have stuck by me through thick and thin, and been an outstanding role model for all of us.