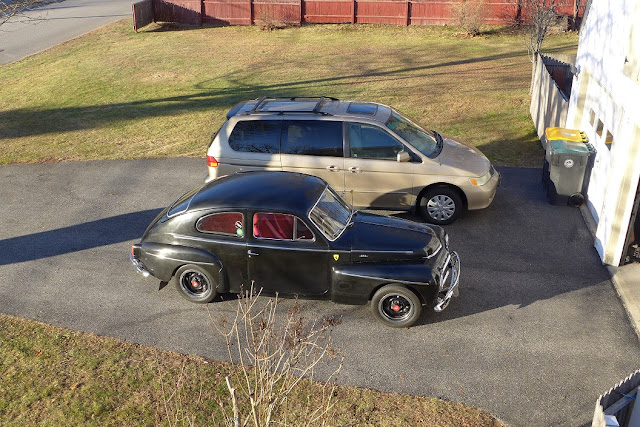 I took the Volvo out for the last ride of the season . . . 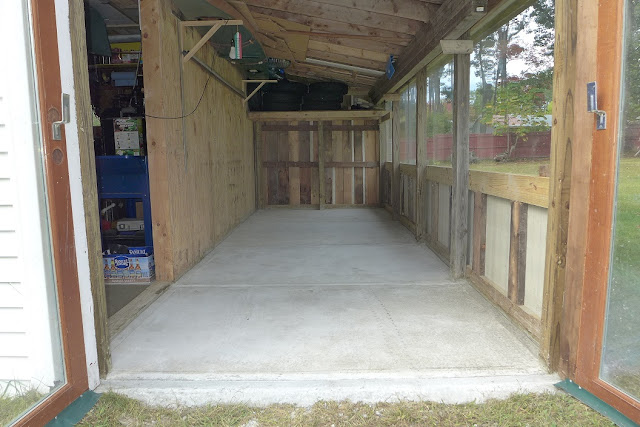 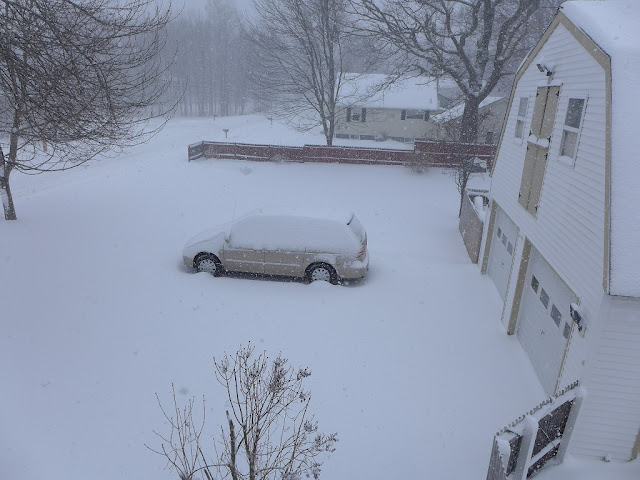 Today this is what my driveway looks like . . . . yea not so nice 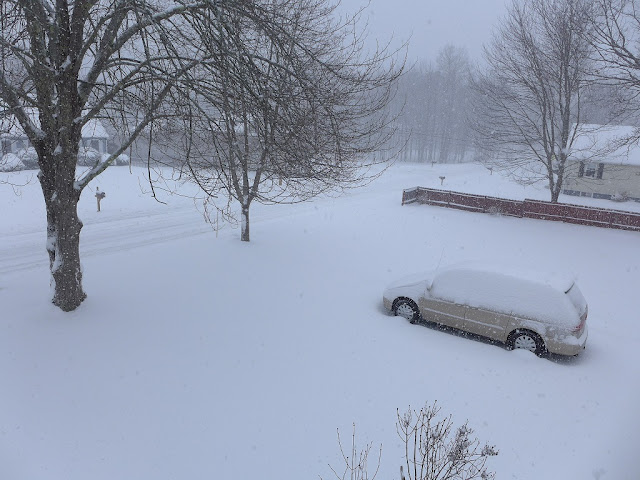 Detestable garbage really . . . only pain and agony ensues from it and it puts the kibosh on getting any projects done outside . 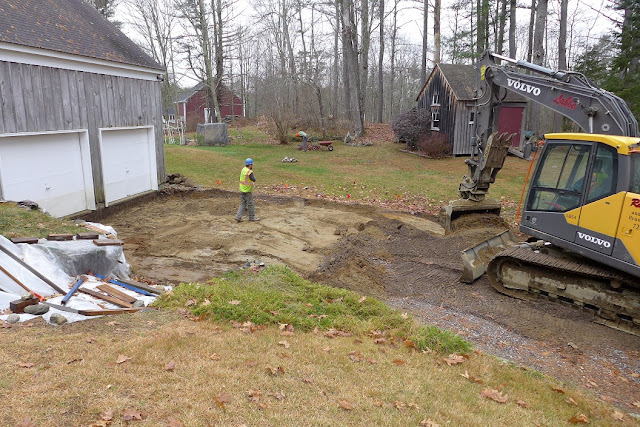 Like this job we squeaked in just last week before the snow . 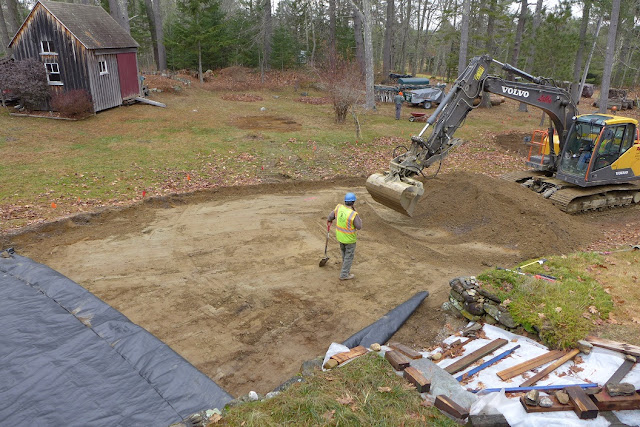 The driveway at my parents house has always been a problem . Forty years ago when the place was built they never quite got it right leaving a lot of clay and loam under the ever so thin layer of gravel . In spring time it is a boggy muddy mess and a real challenge to drive on . It was sheer agony , but we finally got mother to agree that it needed to be fixed . This project has been over a year in the making. Yea , mom hasn't exactly made it easy . I really did not think we'd get it done at all . Paving plants are closed for the season but at least we got this part going . 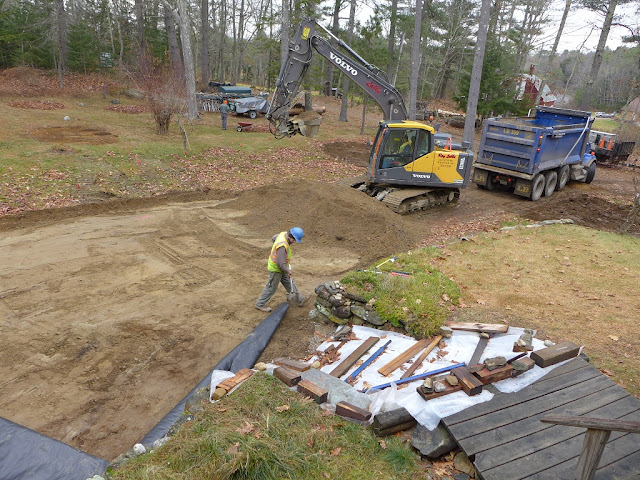 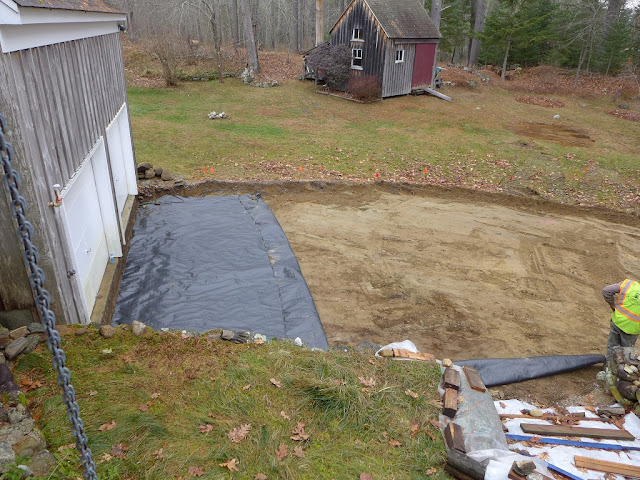 Right there at the edge of the black fabric , there was a deep trench full of loam running right across the driveway under the gravel . So every year we get a massive frost heave about a foot higher than the slab in the garage , so that any snow melt would flood the garage badly . Hopefully that problem is gone now . 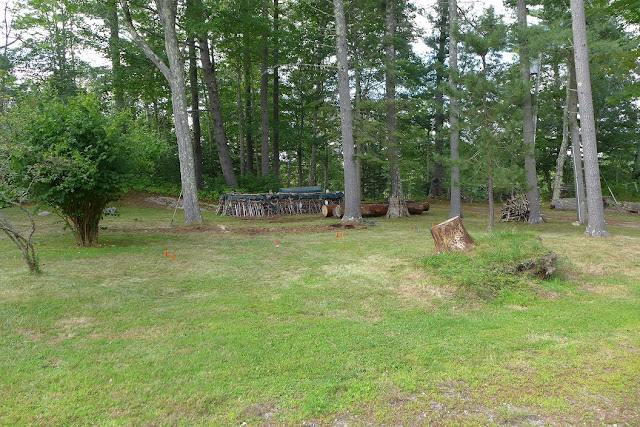 They dug up and hauled away three giant stumps from the trees that came down in the big storm two years ago . 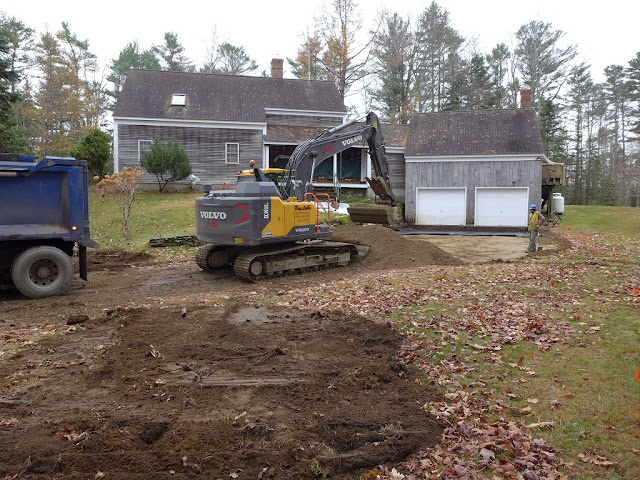 Glad to see that stump gone , should make mowing a lot easier . 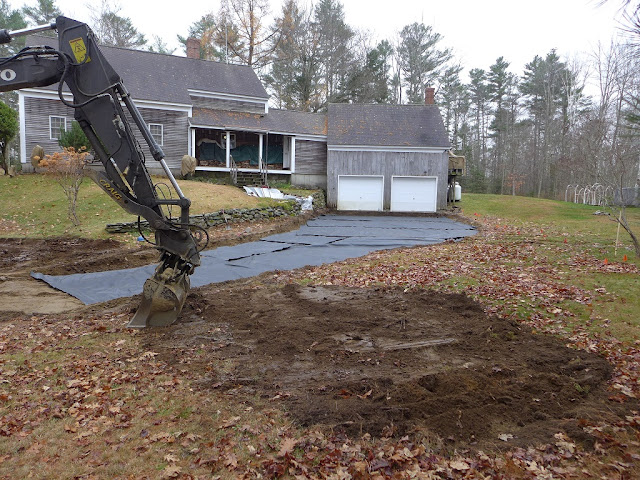 After the Geo-Tech is laid out 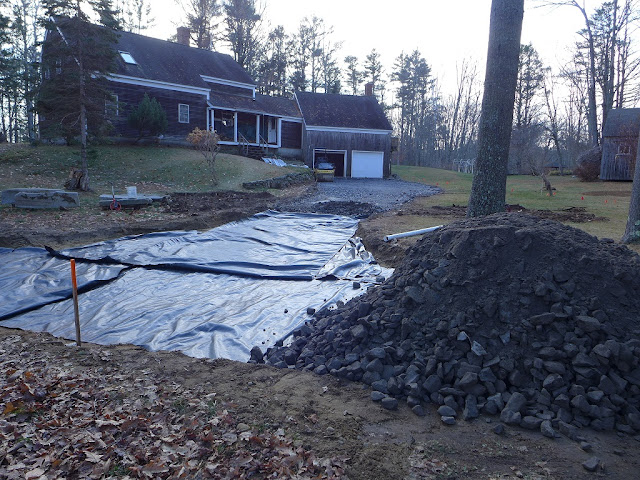 . . a thick layer of heavy crushed rock goes down 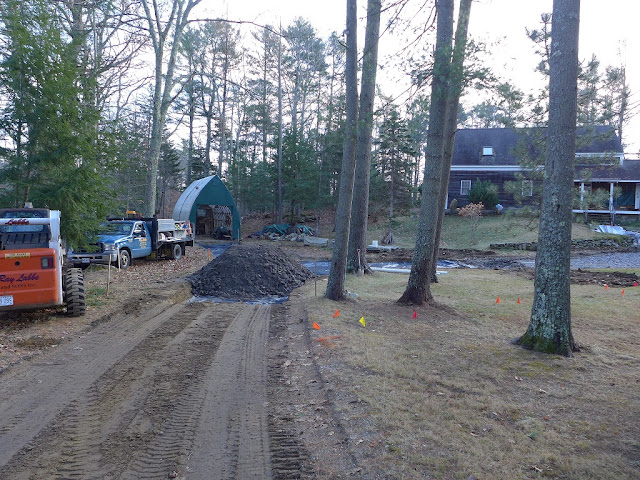 Spread out and compacted 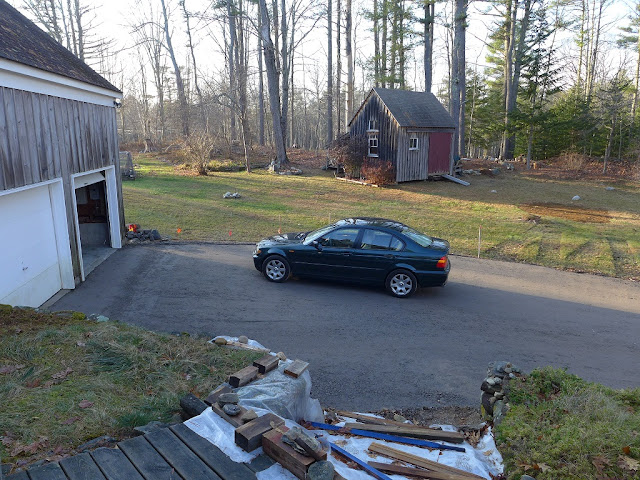 Then finished off with three inches of nicely graded and compacted gravel . 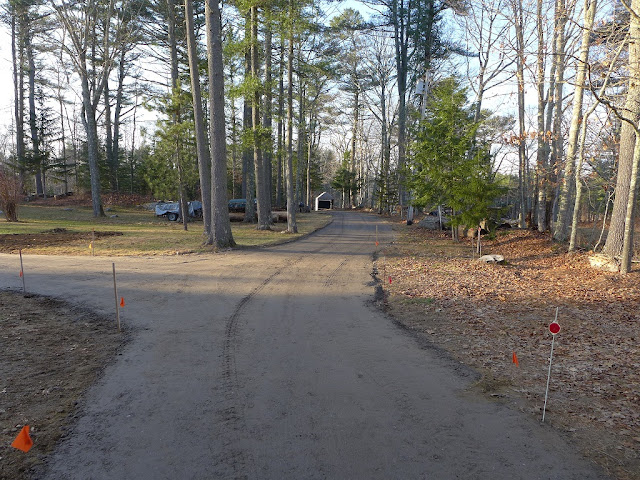 Next spring , when things thaw and the paving plant opens up again , we get it all hot topped . 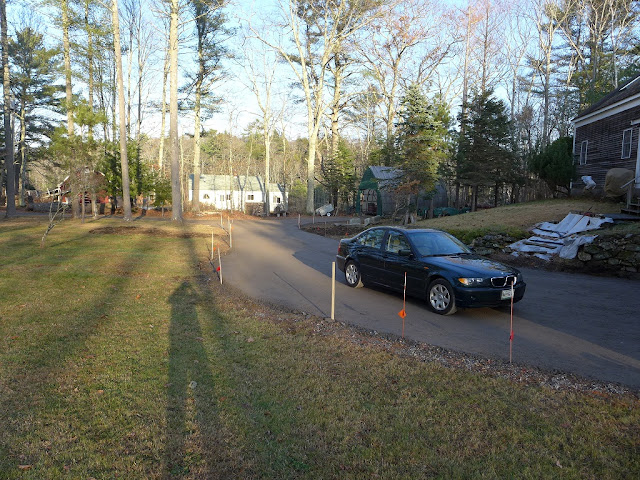 But for now we finally have a driveway that's pitched the right way so the garage don't flood . . . That's five feet of pitch over one hundred and fifty feet , from the garage doors to the T in the driveway . 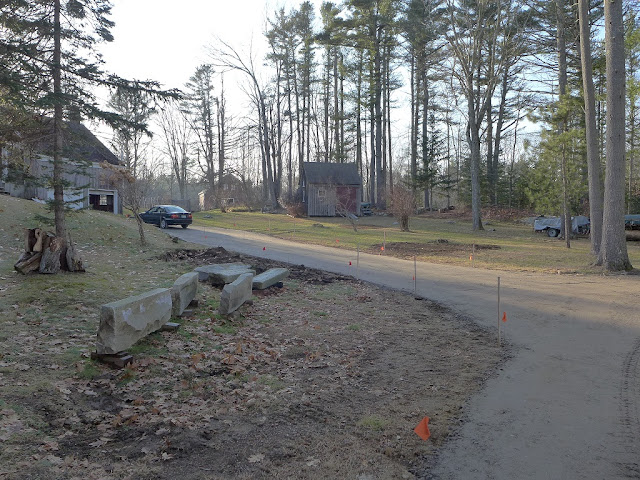 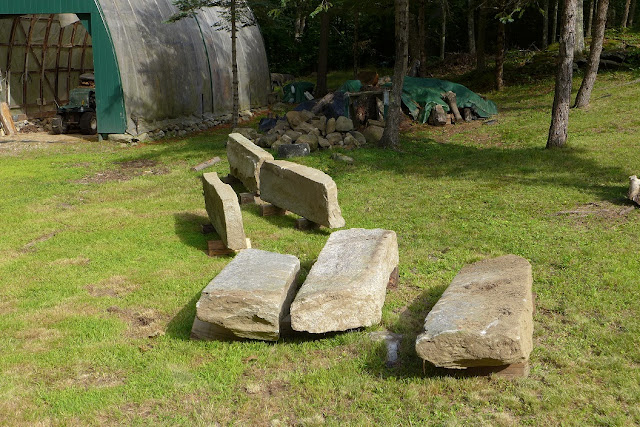 Those are the front steps to the house . 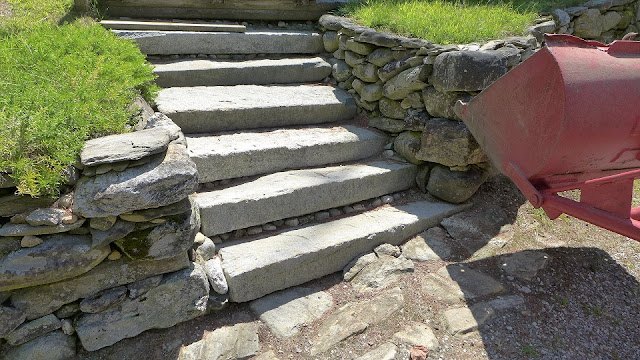 They too were never put in right and were all wonky from forty years of frost heaving , and as the grade would be changing , I needed to fix that . 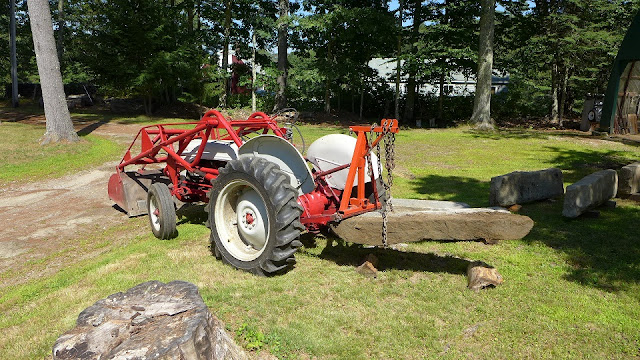 So back in late August I yanked them out in expectation of the driveway rebuild . 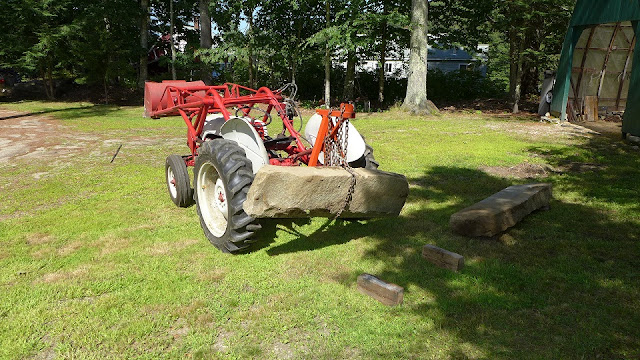 Doing the math on those things I figure they weigh about seven hundred pounds a piece and the bucket could not even begin to budge them without a counterweight on the back of the tractor , so I chained them up and used the three point hitch to lift them . 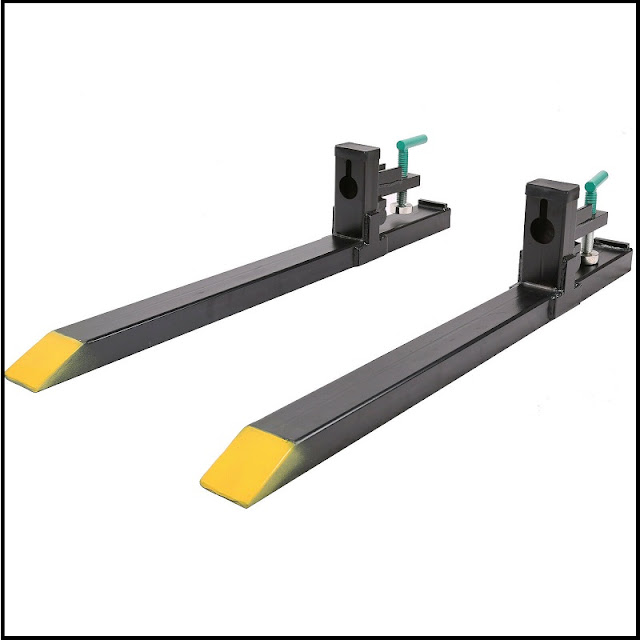 Then I bought some of these commie chinese made thirty inch fork lift tines for the bucket for the grand sum of $89 on Fleabay . But of course , when I try to pick up seven hundred pounds of granite with the bucket , the back wheels come up and loose traction and I can't go anywhere . 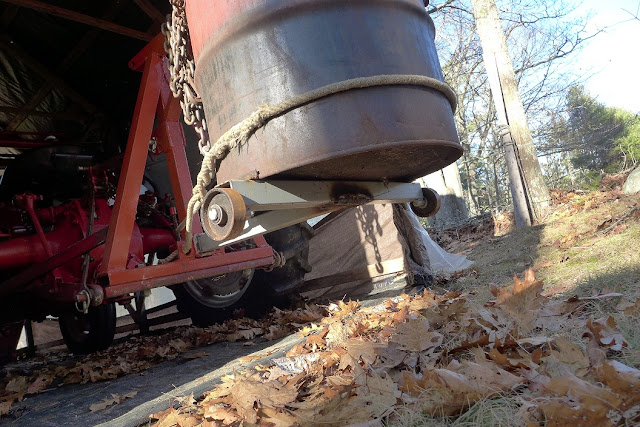 So using the base from an old engine stand and a steel barrel dad had laying around . 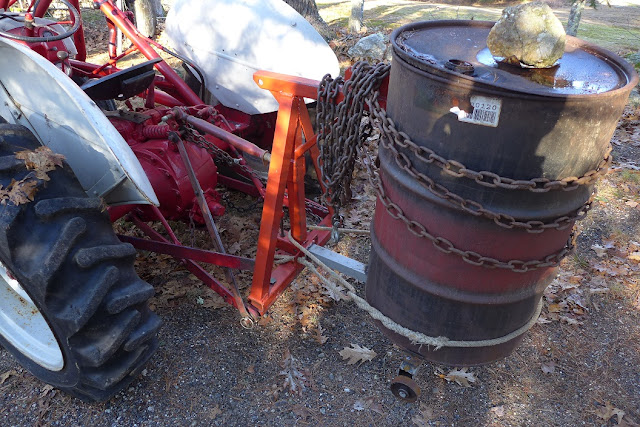 I cobbled this rig together so it fits in the receiver of the logging hitch I built last year . 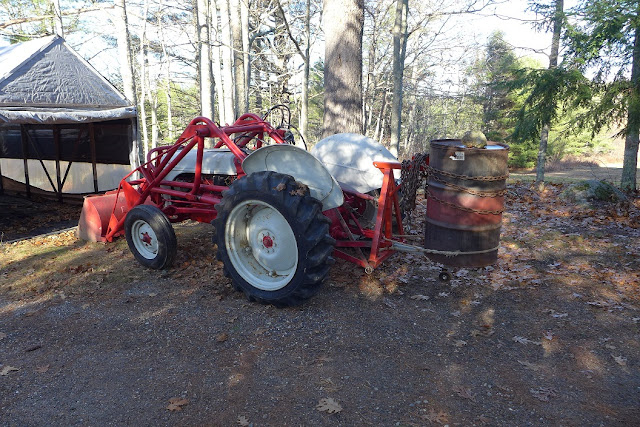 Now I can fill the barrel with rocks and off set the weight of the granite slabs . . . 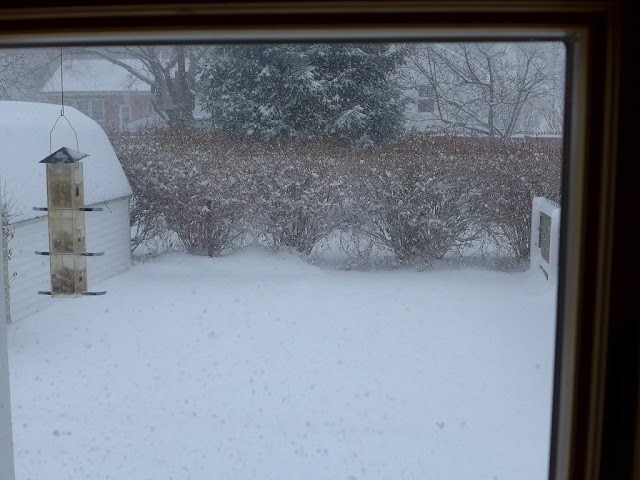