As the old wooden gutters on Balsam Lane were looking a bit long in the tooth and leaking at every joint we agreed it was time to replace them with something new. 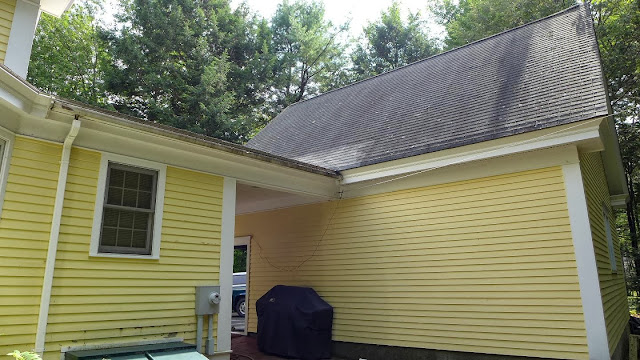 We also chose to add a 14 foot piece to the garage when none was before so this involved modifying the existing trim to delete the crown mold and provide a flat fascia for the hangers to attach. The image above is the "before" photo. 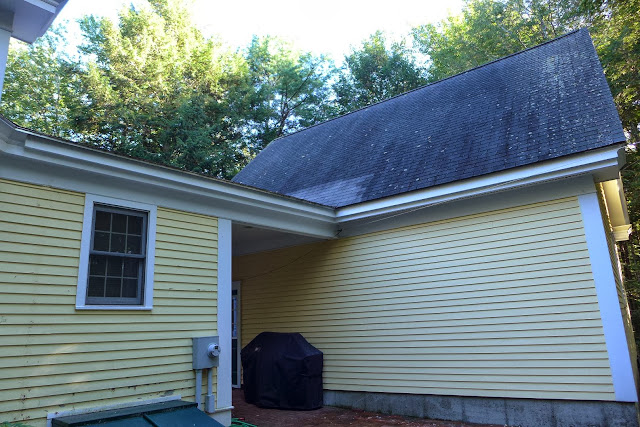 and the "after" image of the fascia now ready to accept the new gutter. 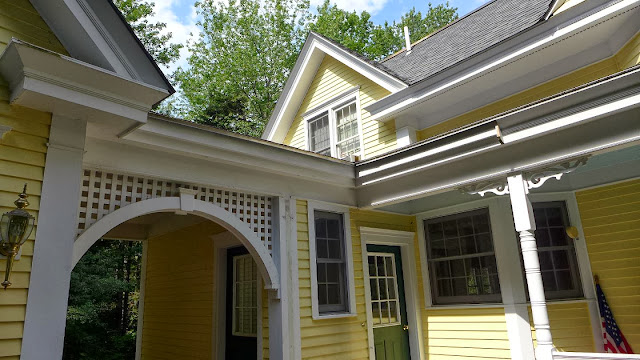 The front of the breezeway after I took the old gutter down also needed some prepping. 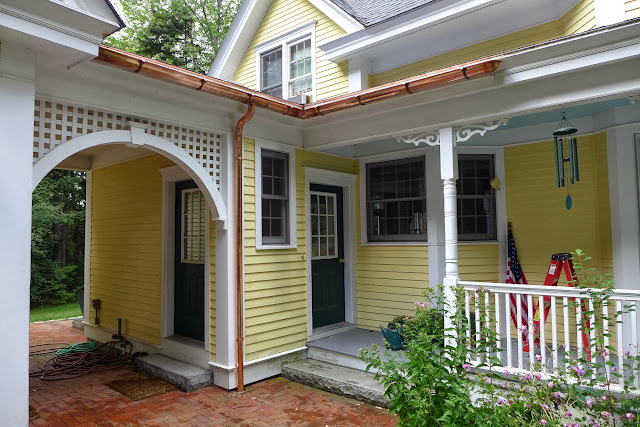 But once the new copper gutters went up, it really dresses the old house up. The archway and lattice on the breezeway was something I built 20 odd years ago as well. 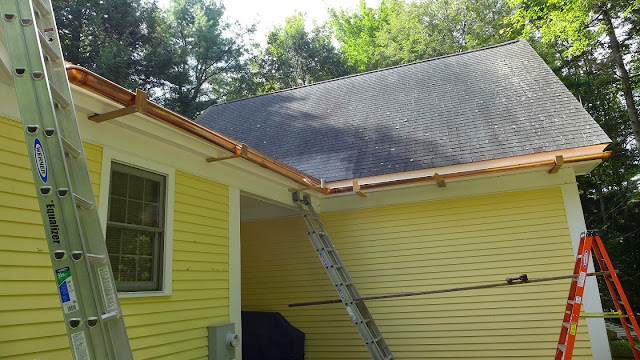 the back with the long runs was a bit more difficult to set up working solo. 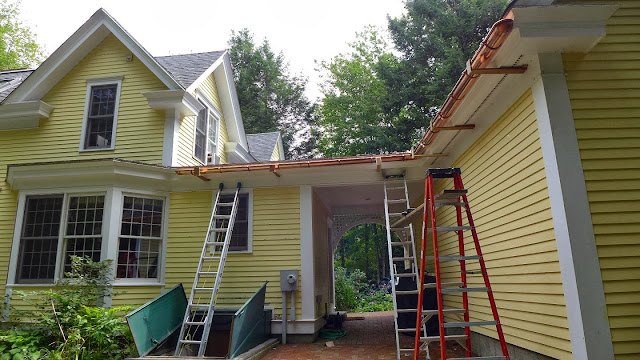 But I made up the bit along the garage with the inside 90 degree miter, end cap and set it on some temporary brackets to hold it close to where it went, yet give me some degree of movement so I could solder it to the 18 foot leg along the house. 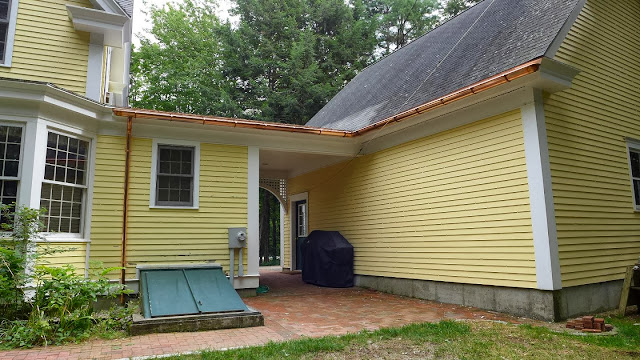 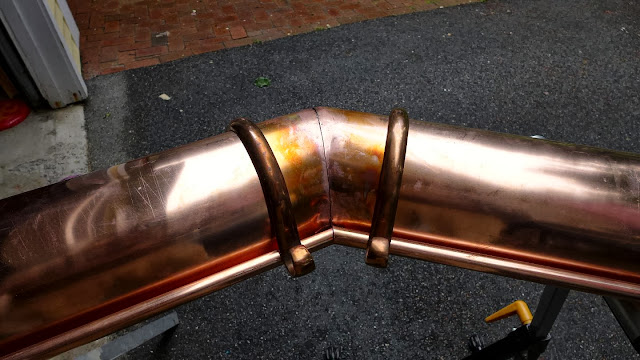 The front entry required making up an inside 45 miter that failed to arrive with the order, so I had left it for last. This also helped while I got past the initial learning curve. 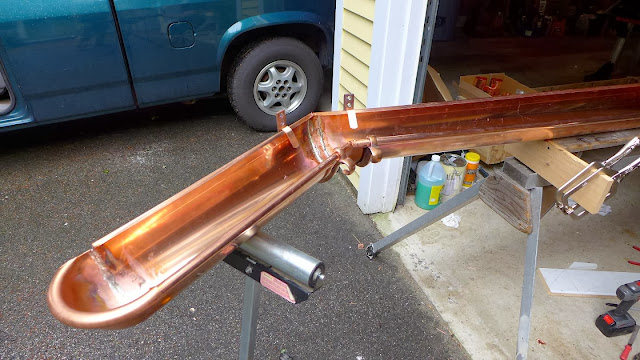 not too shoddy for a first try . . . . truth is, I had to do it three times over before I got the thing to fit right. 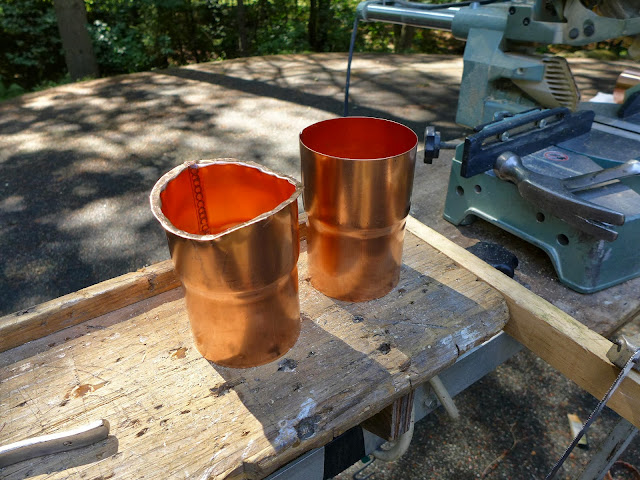 As I was short one downspout thimble but had an extra downspout slip connector I got creative and modified it to suit the task. 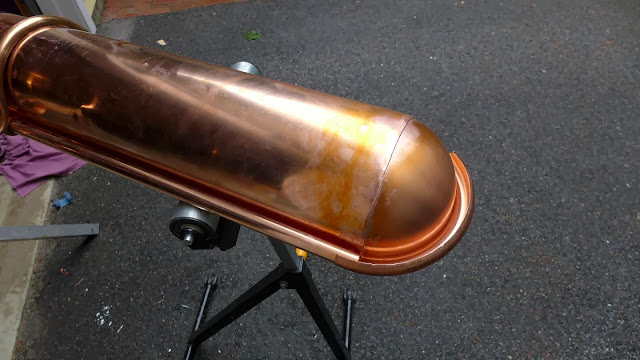 and the 1/4 ball end cap went a bit smoother 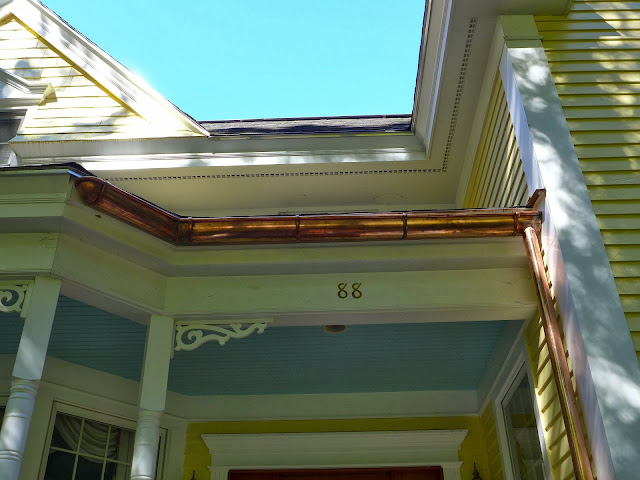 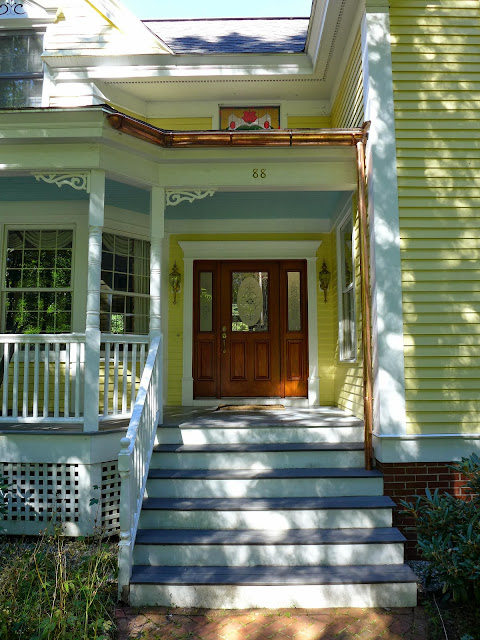 And while we were at it, I replaced the old cedar treads on the front steps with new composite decking. 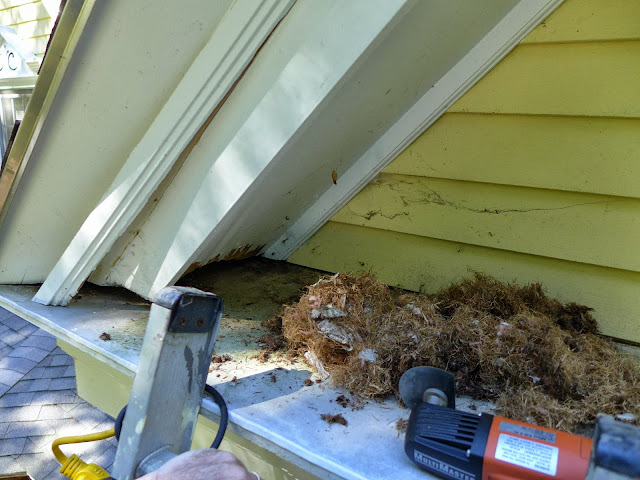 and since I was right there, we had another squirrel den to repair. This one turned out to be occupied by a flying squirrel. As I was cleaning out the nesting debris a big eyed creature poked its head out of the gap and leapt for the edge. Just as I thought that was a mighty long leap for a tiny squirrel, I looked over just in time to see it spread eagle in mid glide making a beeline for the pine tree. 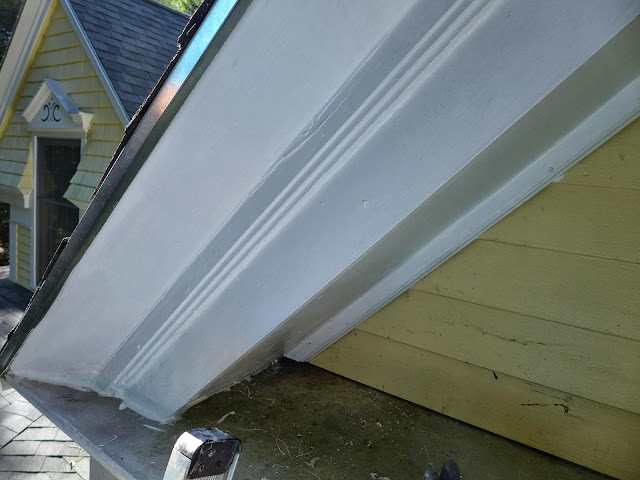 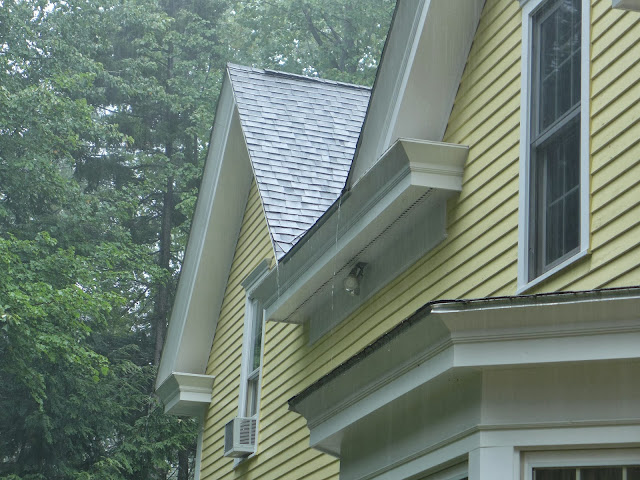 Got caught in a couple of hard downpours last week 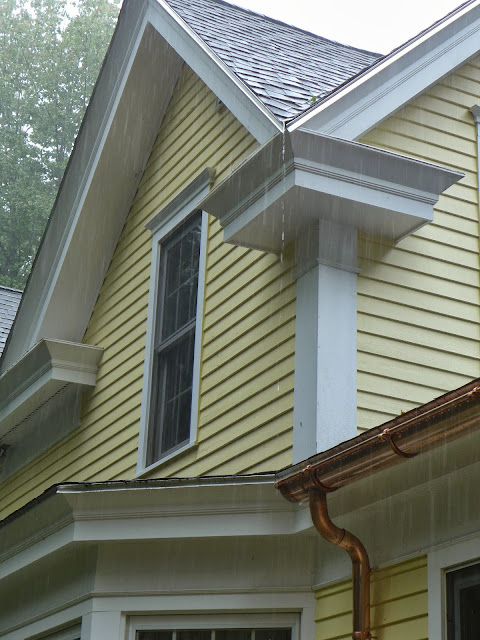 but it gave me the opportunity to see where a couple more bits of gutter could be added.
so using some left over lengths . . . . 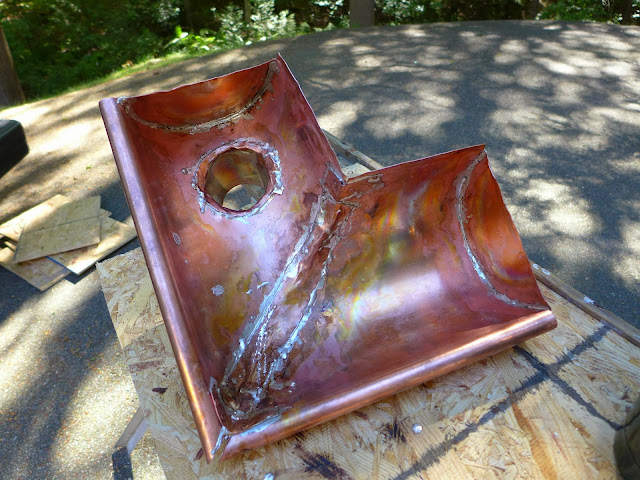 I made up an outside 90 degree miter with home made end caps and downspout thimble. 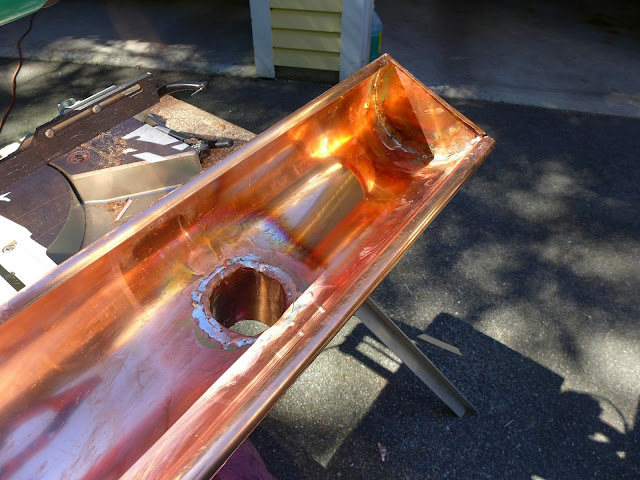 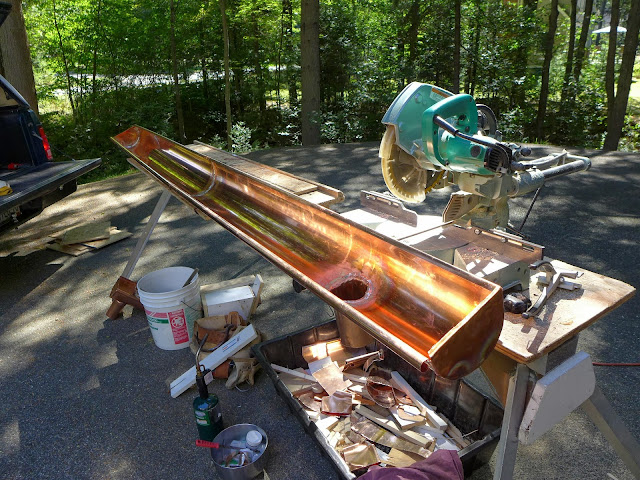 to test out for looks. If it all looks acceptable I will order some more fittings and downspouts and make them permanent. 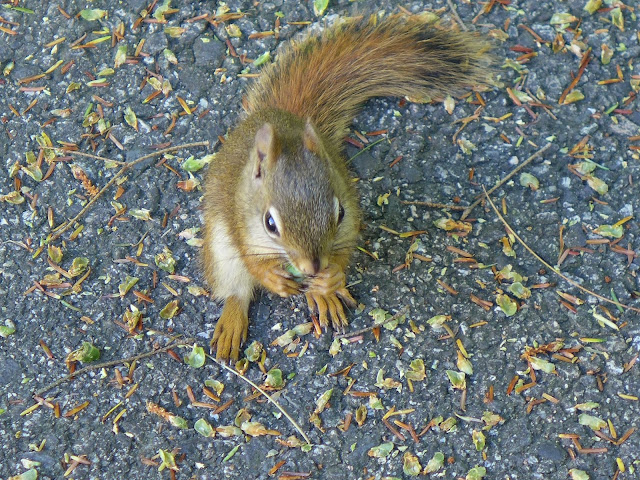 After a while even the red squirrels seemed to get used to me. This little fellow was about 2 feet away.