Late last week there was a flurry of activity in the rhododendron bush by the kitchen window and mother cardinal was doing a lot of coming and going instead of just sitting in the nest as she had been for nearly two weeks. I figured the babies had hatched. 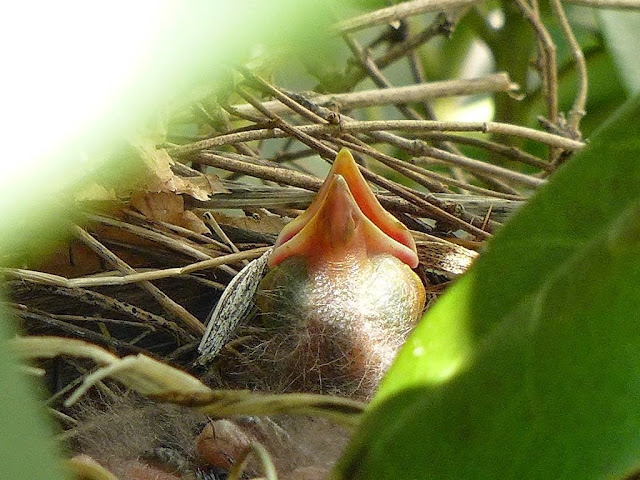 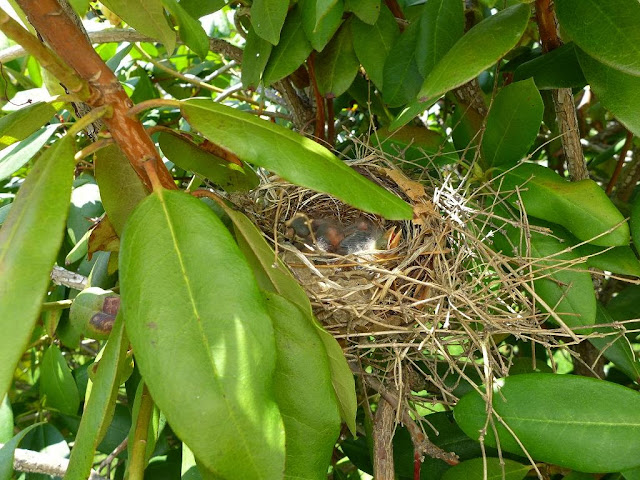 . . . and got a couple decent shots while mother was out on a food run. 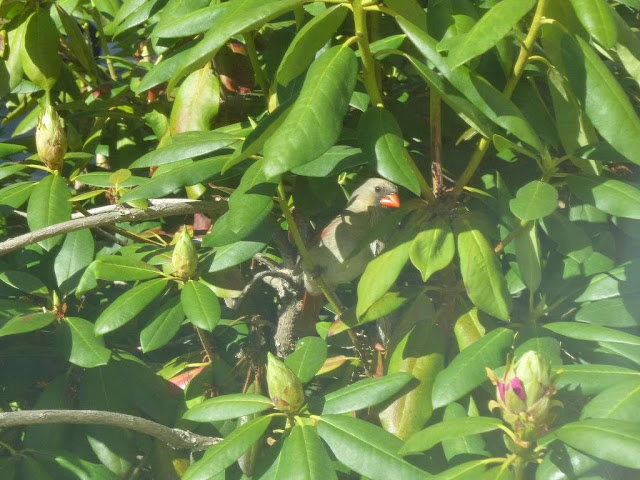 Mother was very protective chasing off a couple of sparrows that came by with worms wanting to feed the little ones. 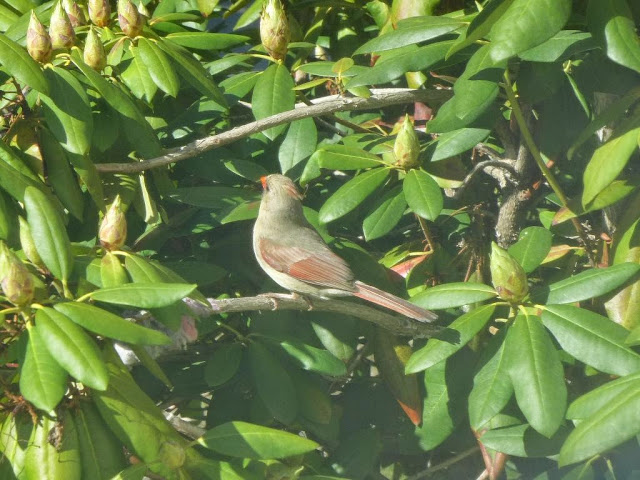 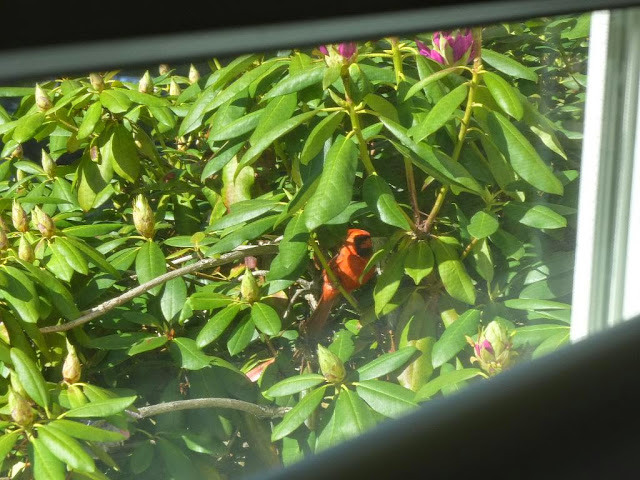 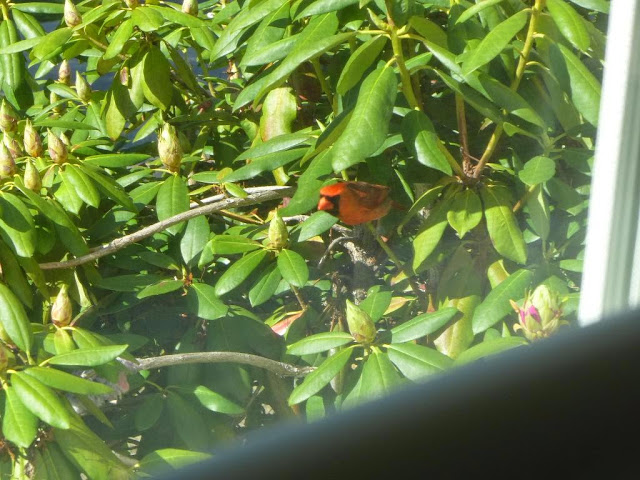 . . . keeping busy feeding the little ones 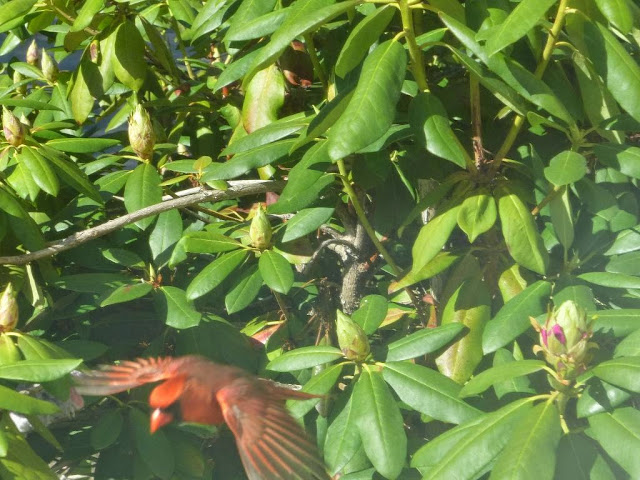 Back and forth all day 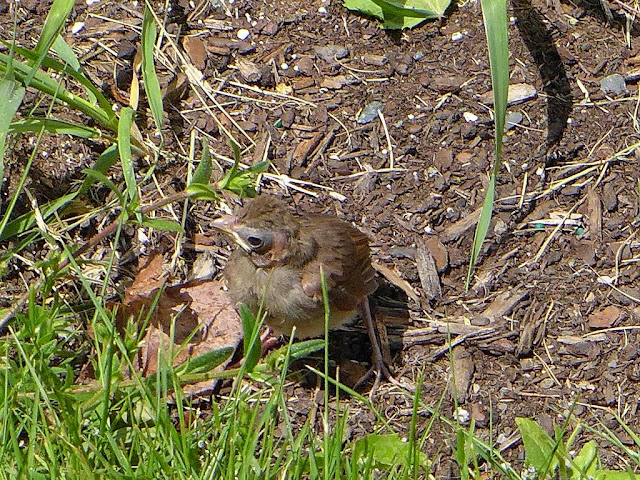 Then suddenly today in another flurry of chirping, the little ones jumped out of the nest. 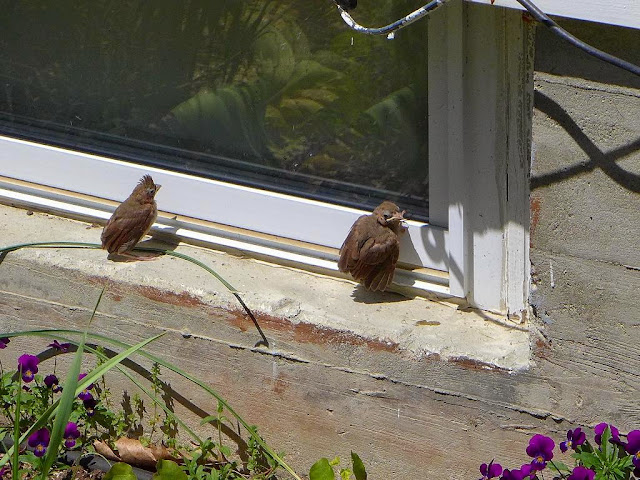 We counted three in total. One made his way to the other side of the house and was looking a bit lost. So I picked him up and put him back under the bush and they were all soon back in the nest. These guys can't be much more than a week old. They did manage to flutter about a bit in little ten foot hops. But they are not quite ready for solo flights. 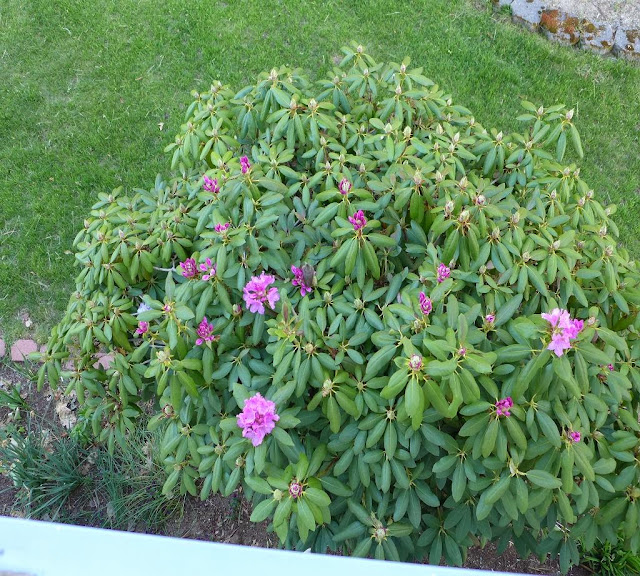 Later in the evening there was an awful lot of chirping out there so I stuck my head out the upstairs window and saw one little fellow sitting on top of a flower calling for mom. 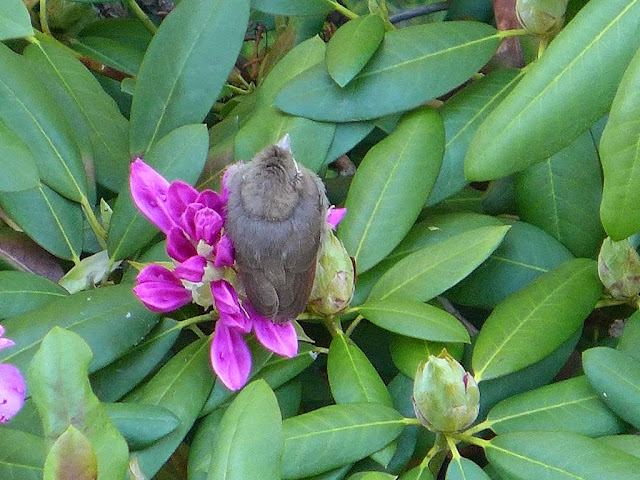 Zooming in a bit 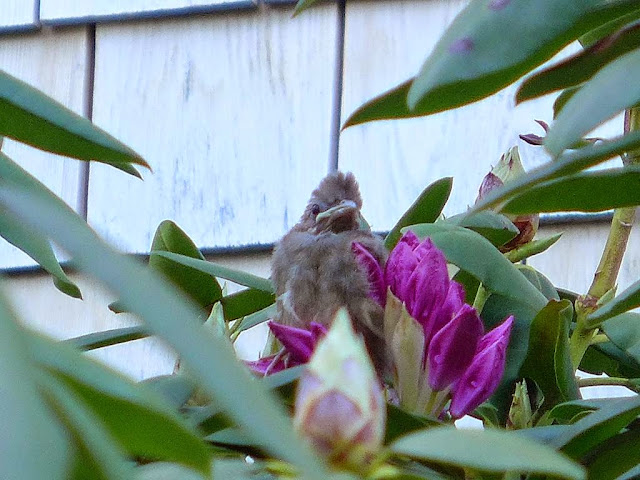 The ground level view. Funny looking creatures at this point as they are mostly all beak. 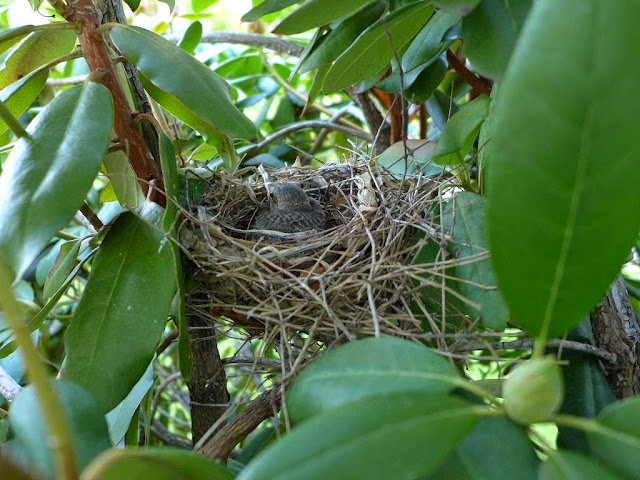 There was one left in the nest by 7:30 pm. . . but what do I see? that has totally different coloring from the cardinal chicks. Those look like sparrow stripes, could it be? No wonder the mother sparrow kept trying to feed the chicks. Perhaps she sneaked an egg in the nest when the cardinal was not looking. 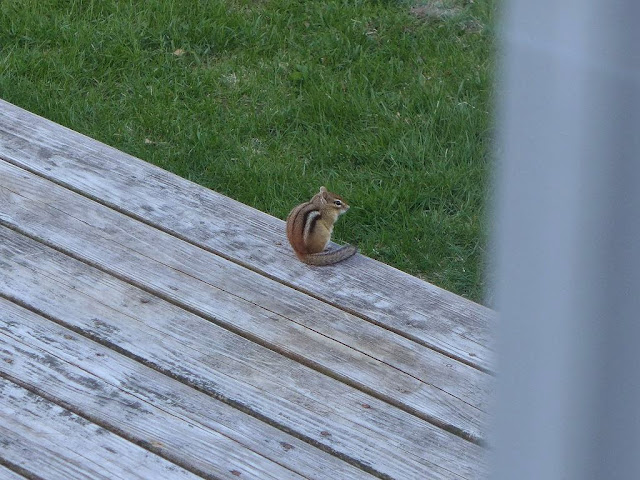 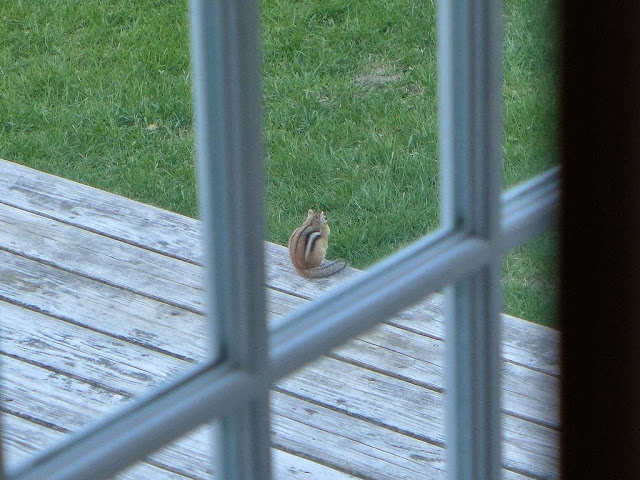 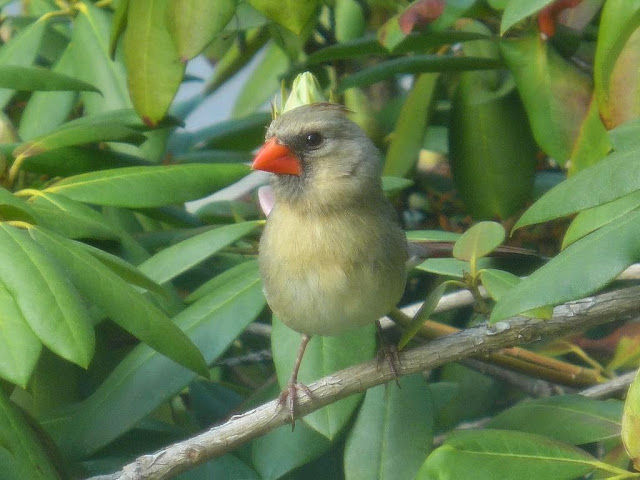 Mother Cardinal pushed the last chick out of the nest this morning. 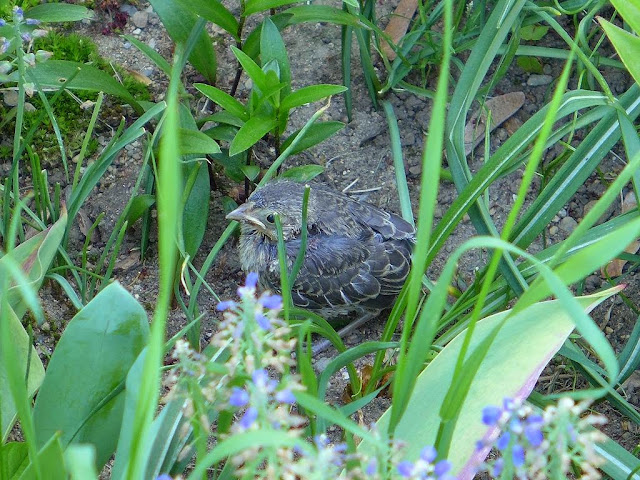 But this fellow is definitely not a cardinal chick. Completely different coloring from the other three chicks. 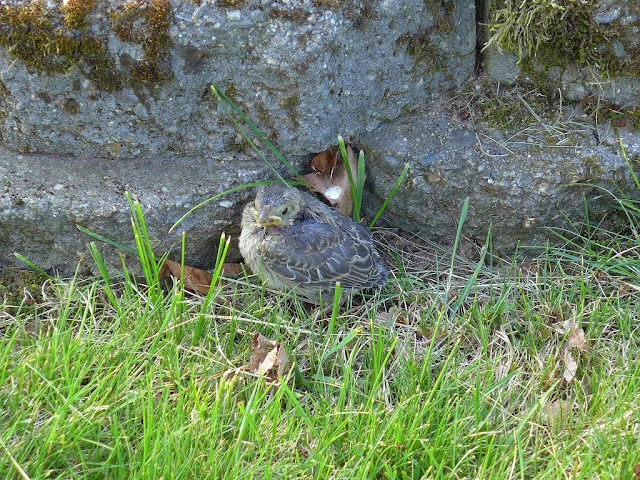 And his flying if definitely not as well along as his siblings. 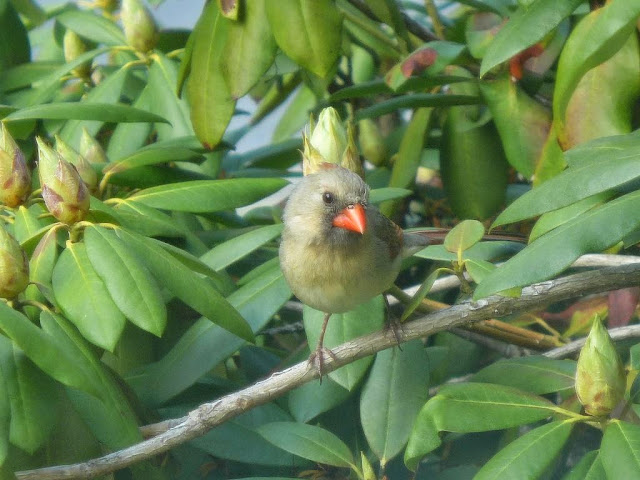 I think mom got duped in to raising a sparrow's baby.