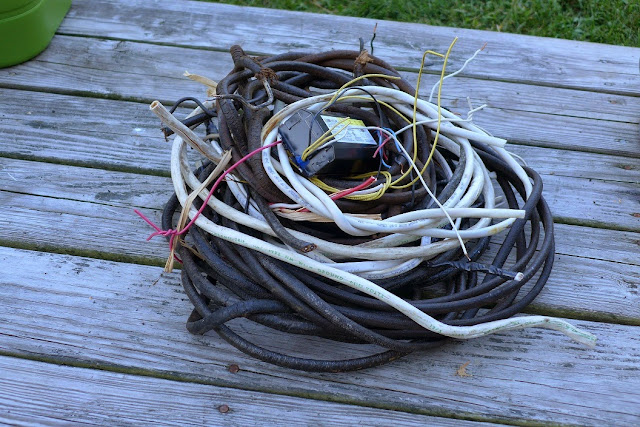 Its dead, drawn and quartered remnants baking in the sun on the deck. 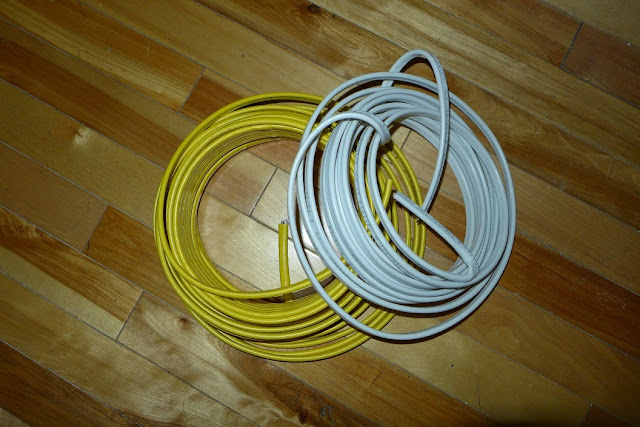 Replaced by this beautiful yet somewhat costly Romex wire in two flavors. 14-2 and 12-2 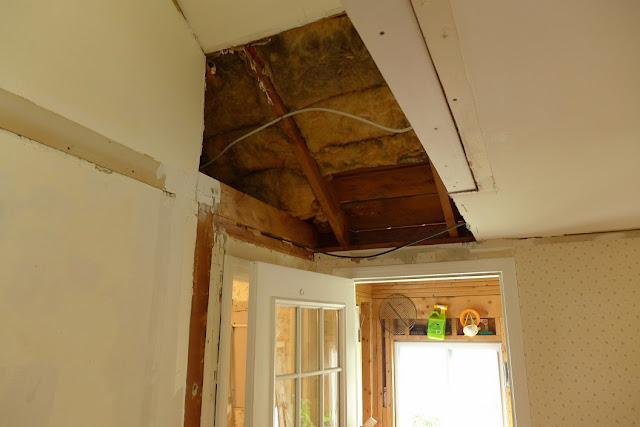 When we last left you we still had the ceiling over the back entry door in place. Well I figured I might as well go whole hog and do it right, so that came down leaving two wires running across the newly vaulted stairwell ceiling that needed to be dealt with. So started the saga with the Great Electron Octopus. I easily determined that the white wire daisy-chained the upstairs outlets together. But the old gnarly black wire went in to the wall on the right of the above photo. 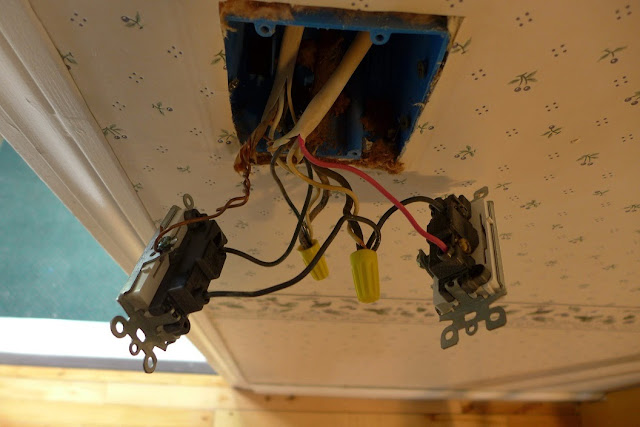 To this mess at the light switch. The two lower fat wires with the yellow wire nuts are that black wire running across my newly vaulted ceiling. I guess it is time to shut the power off to the breaker that feeds that. 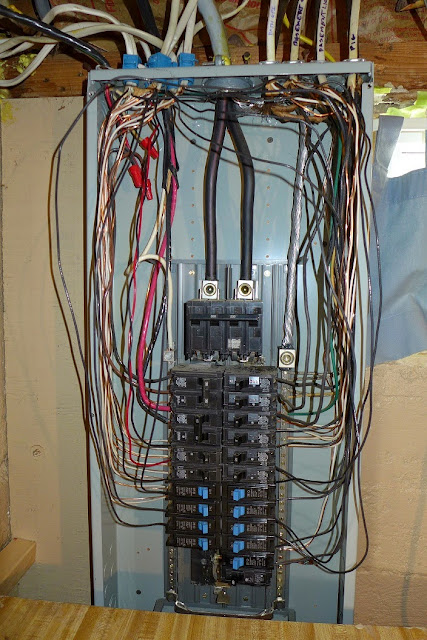 But as nothing is labeled in the basement breaker box, a bit of sorting is in order. For European readers used to seeing 220 volts, the standard here in the US is 110 volts. The big grey line coming in to the box is two lines of 110. That's the two big fat wires that are divided in to two banks of 110 volts with two columns of breakers. About 12 hours of head scratching and wire tracing in this mess allows me . . . . 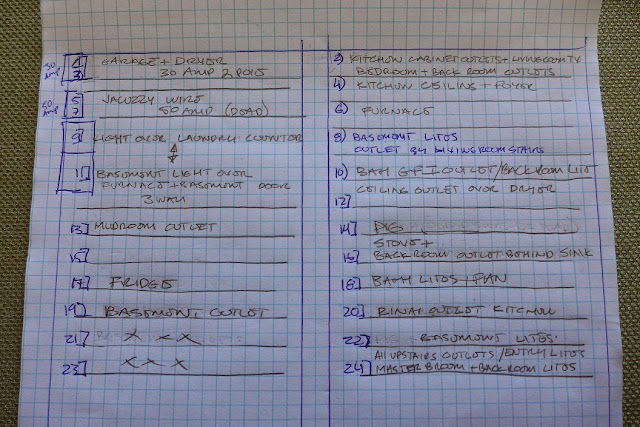 . . . . to make a legend so I know what breaker is tied in to what wire and what else is piggybacked on to it further down the line. Seventy years of hacks messing with things and hiding them behind walls is a frightening thing. 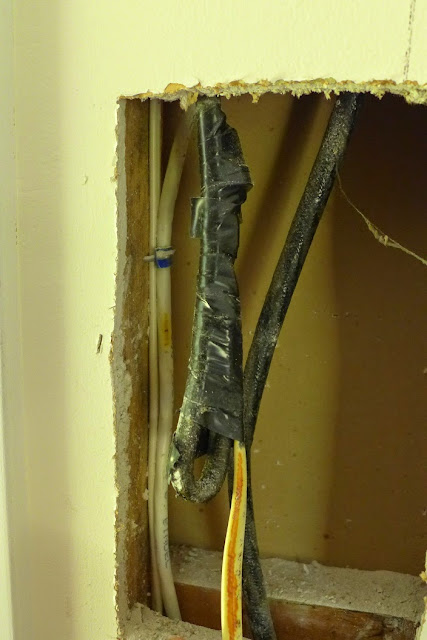 Back tracing the black wire in the stairwell brings us to a couple of these totally illegal and positively monkey rigged affairs. 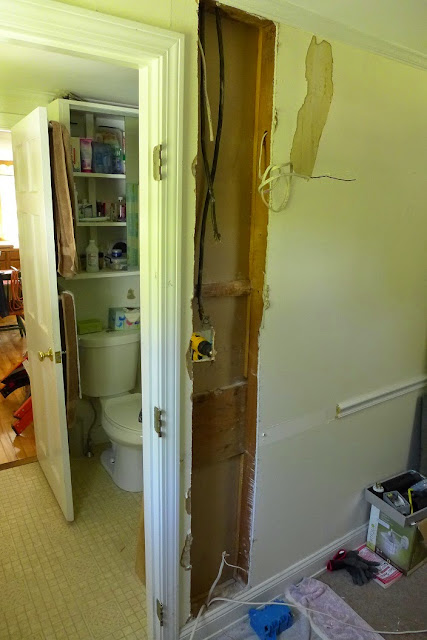 So finish cutting out the drywall in the back room and start snipping wires. 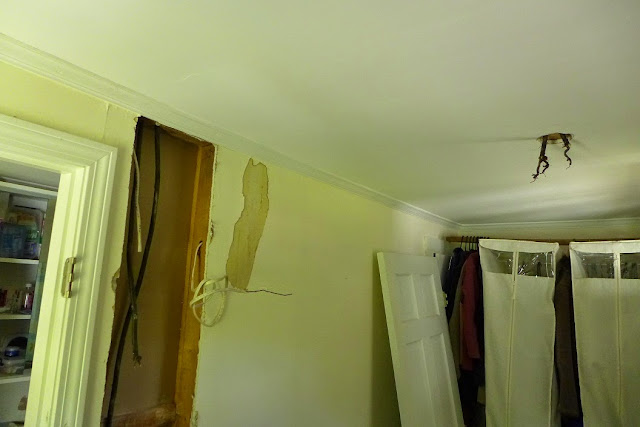 The black wire fed the light switch in the back room, which fed the overhead light, and then went from there to . . . . 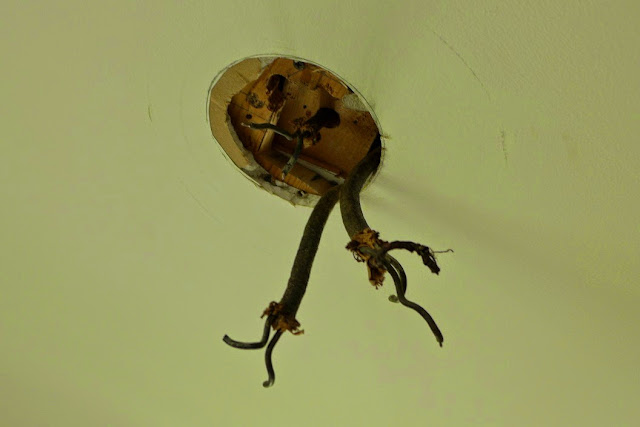 . . . the middle wire in this photo of the ceiling light  fixture in the master bedroom, and fed the light switch in the wall by the bedroom door . . . 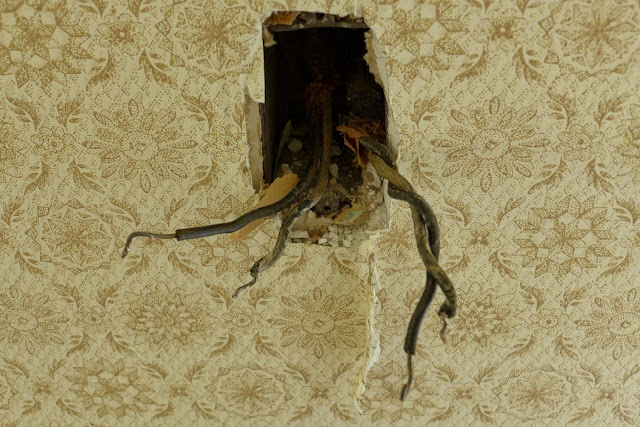 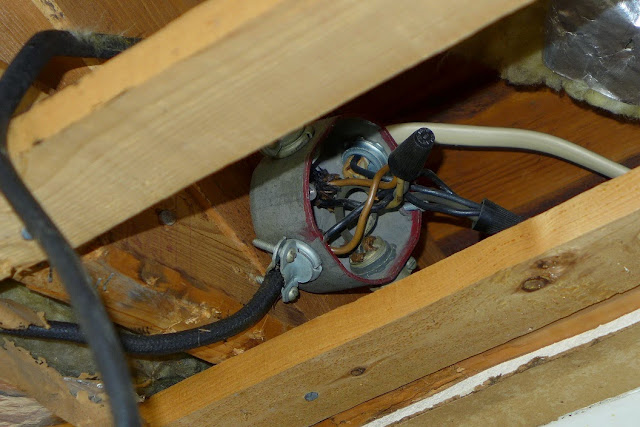 . . . fed the head of the Great Electron Octopus at the top of the stairs via the lower entry into that gang-box seen in the photo above. The image is just the mess I saw when I pulled down the ceiling drywall at the top of the stairs on the second floor. Can you say hacked? Not even put together, just all hanging off one nail not even properly affixed to the rafters. 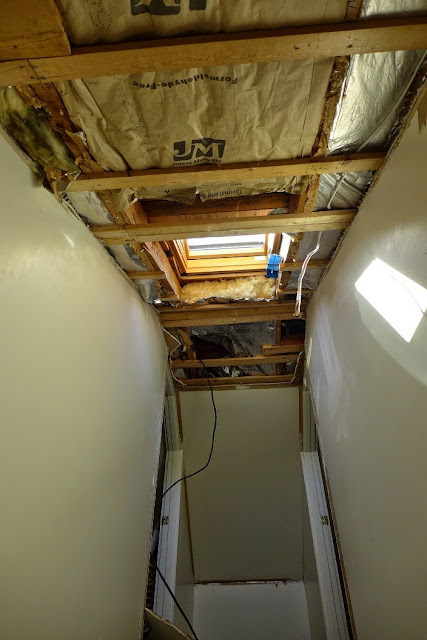 Which I happened to find while tracing out the old stairwell light wire to its source after about 15 hours of messing with all the outlets upstairs to sort out what was piggybacked on to what, and determining that there had to be a junction box hidden somewhere in the peak of the house and removing the remaining drywall in the stairwell ceiling was the only logical solution. 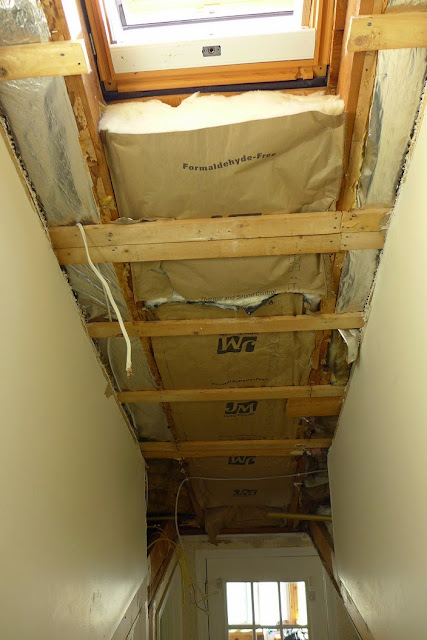 That then allowed me to install new insulation in the stairwell ceiling. 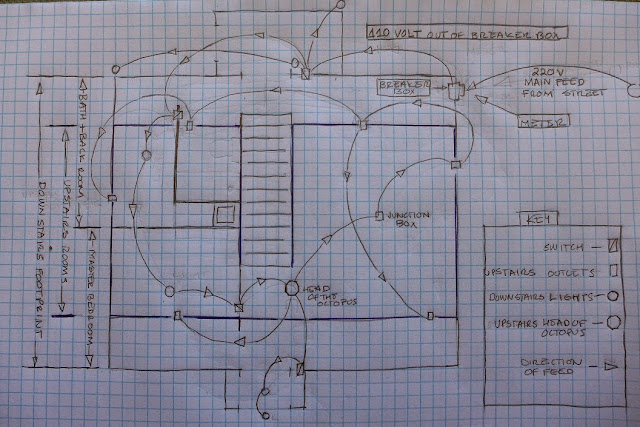 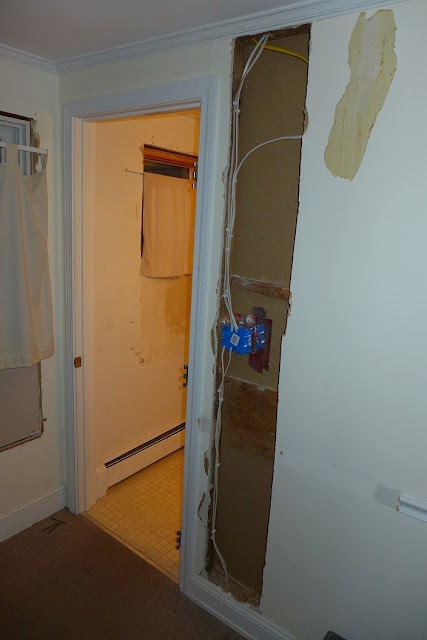 I have now run two new feed wires up to the second floor in order to feed each bedroom from a separate breaker. Also rewired the bathroom lights and ceiling fan, that never went anywhere. 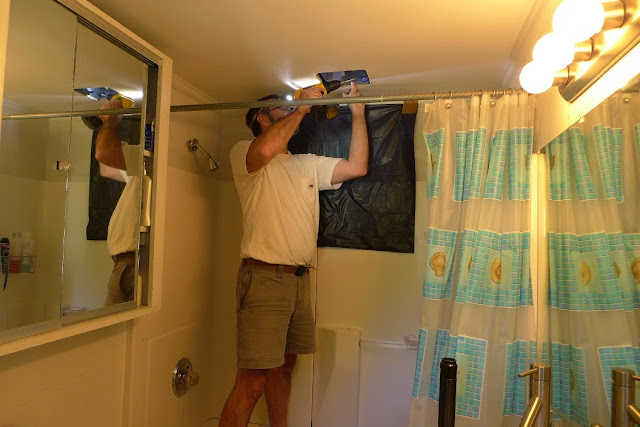 So I installed a new bathroom fan with a proper vent . . . 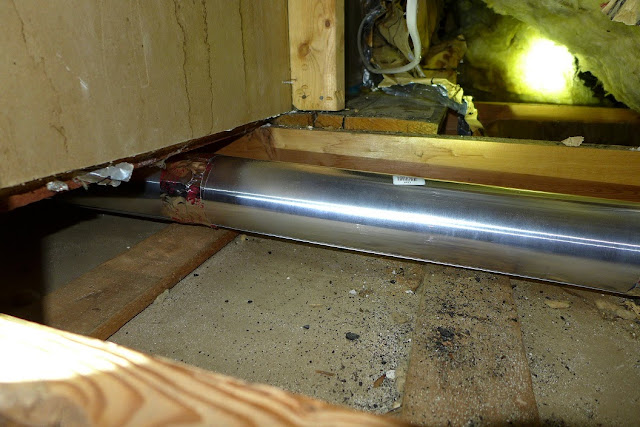 and the corresponding duct work 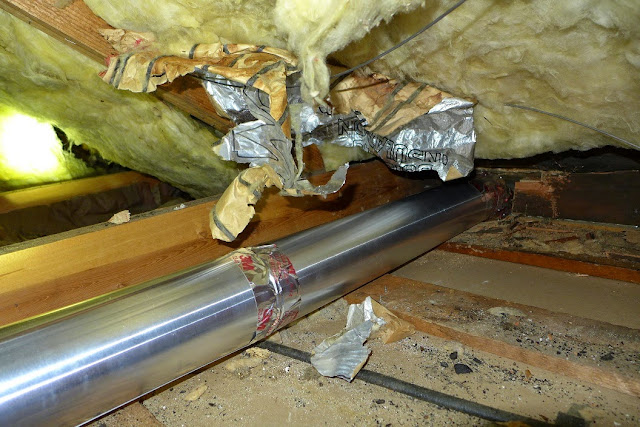 to vent the bathroom outside . . .  to prevent the mold that I was trying to clean up when I started this whole process 10 days ago. 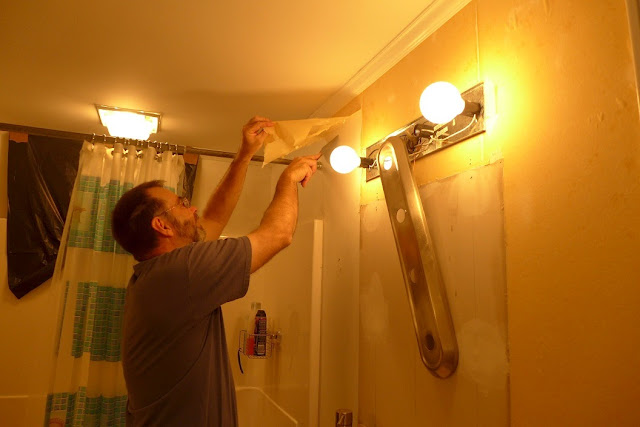 So I finished removing the wall paper in the bathroom 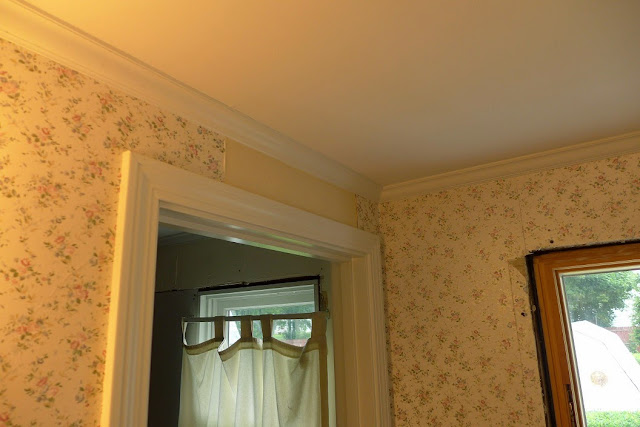 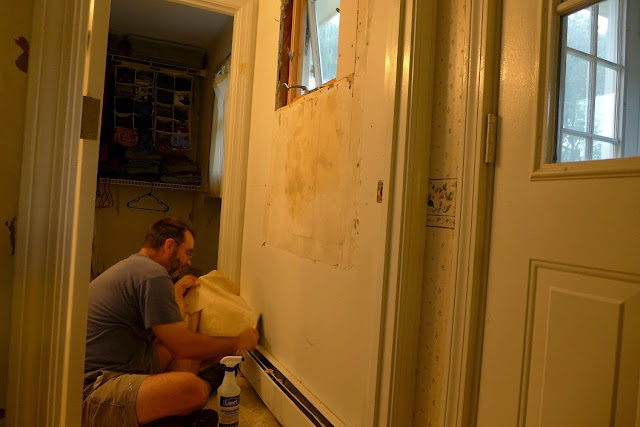 And that is the short and sweet version of the story . . . I think I am making headway.