The Webley revolver in its various iterations was the standard British military sidearm for the better part of  eighty years . 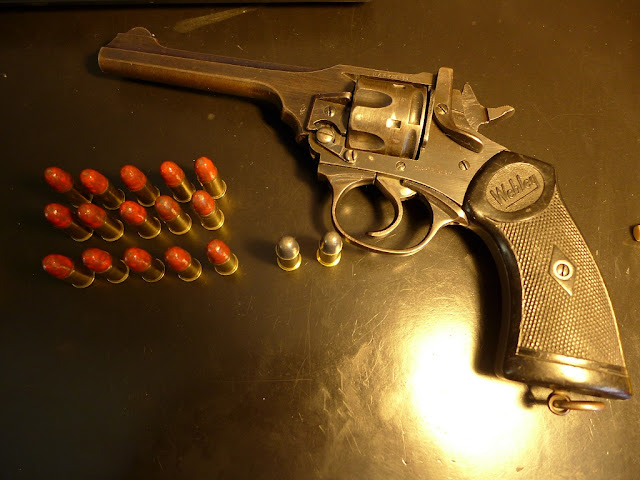 First adopted by the British military in 1887 it remained in service until 1963 . It is still in production in India today as the IOF 32 revolver . The first versions were a big clunker in .455 caliber . Like a 45 colt but a case that is about half as long . Then about the end of WW1 the powers that be decided that the .455 was too much of an anvil to be lugging around and they downsized it to the 38/200 and called it the Webley Mark IV 38 . Mine pictured above was built in 1944 . 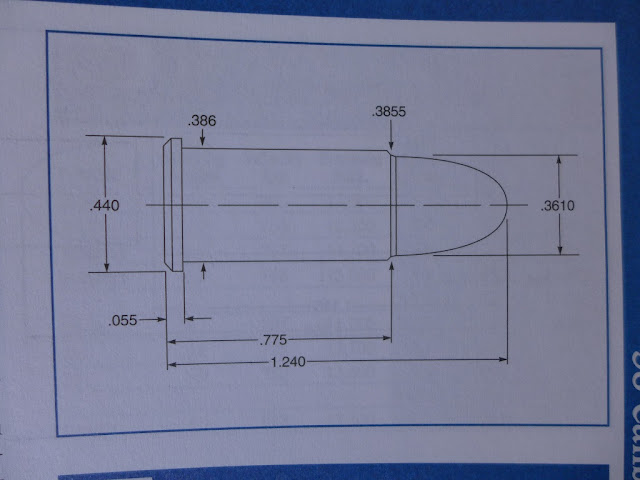 The 38/200 is a 38 S&W case with a 200 grain round nose soft lead projectile . But unlike the rest of the universe that had settled on a .357 inch bore diameter for 38 caliber , the Brits chose to use a .361 inch bore diameter . So standard store bought 38 S&W run a bit loose in the pipe . They are also only 145 grain projectiles and are loaded very mild for use in the weaker top-break pocket revolvers of the turn of the century .
Seems a lot of folks who own the old Webleys are interested in recreating the original 200 grain 361 thousands diameter projectile load , but bullet molds in that size are hard to come by and rather expensive as they are all custom made . They cost more than I paid for the gun itself . But there are many ways to skin the cat . Some buy standard 38 cal molds and hone them out to .361 with a cast bullet and some valve grinding compound . That is one option . But why not kill two birds with one stone? Prevent leading in the barrel and increase the diameter of the projectiles at the same time .  So how about powder coating ? Essentially you are adding a jacket to the cast bullet and thus some thickness . I experimented with it a couple of years ago and though I made some I never actually loaded or tried firing them . 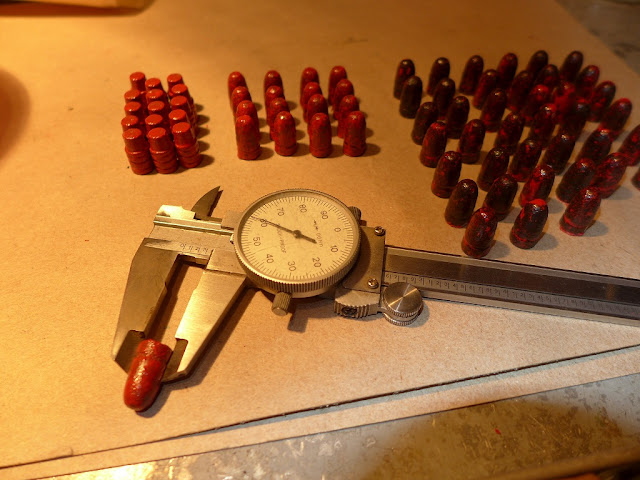 I had some soft lead round nose, hollow base Magtech pills which were ideal and miked out to about  360 thousands of an inch after a double layer of powder coating . 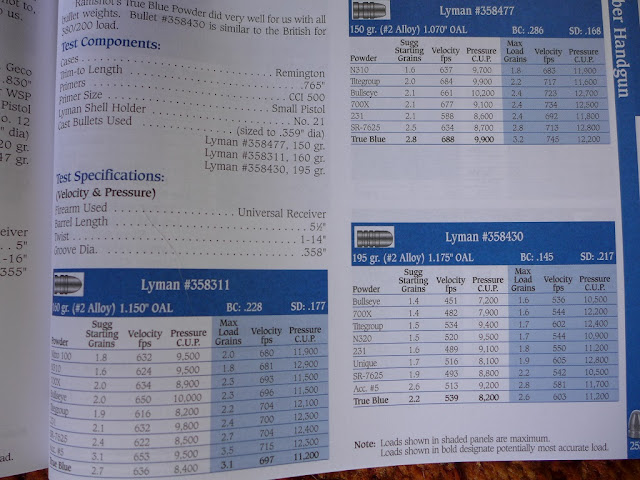 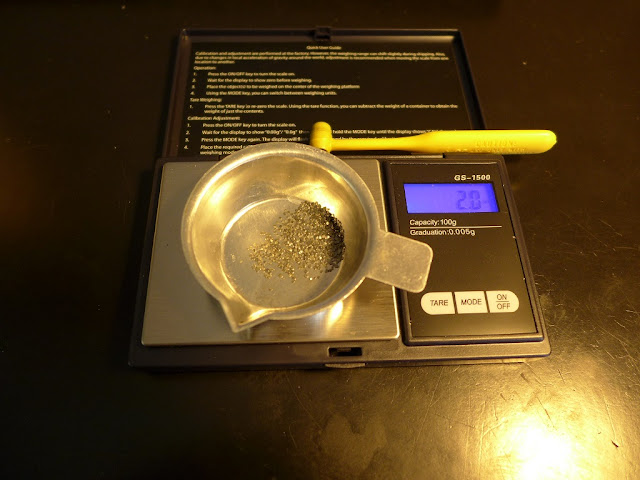 Searching a couple reloader's forums and Hodgdons own page I came up with a reasonably mild powder charge for 157 grain projectiles in the short 38 S&W cases . I settled on 2.2 grains of Hodgdons HP-38 minus 10% as a starting load and can work my way up from there . 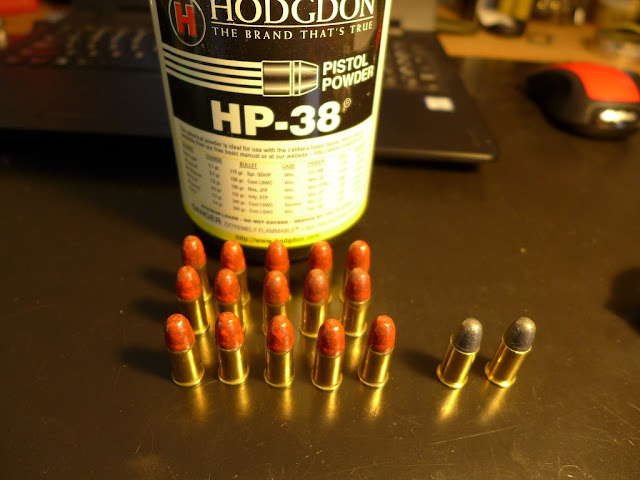 Don't they look pretty . The ones on the right are store bought Sellier and Bellot 145 grain round nose 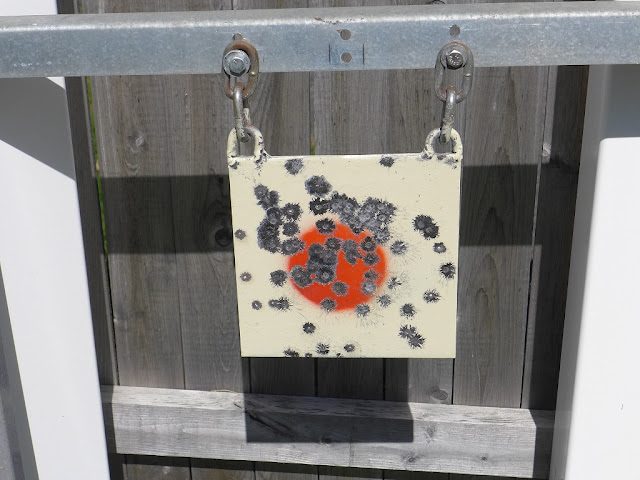 And at about 30 feet they prove accurate enough on my homemade six inch steel gong . Good enough for my bad eyes anyhow . 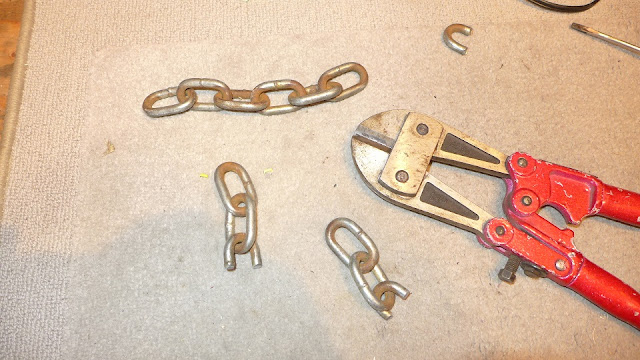 Made that gong out of some stuff I had in my scrap steel bin . Started with a couple links of chain . 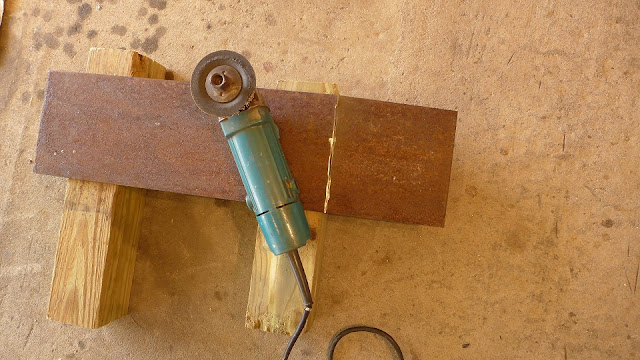 A piece of quarter inch , six by six piece of steel plate 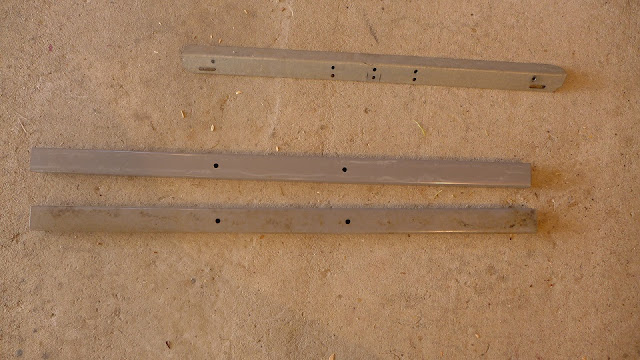 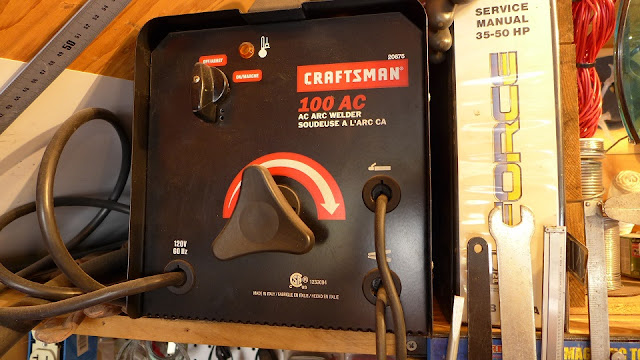 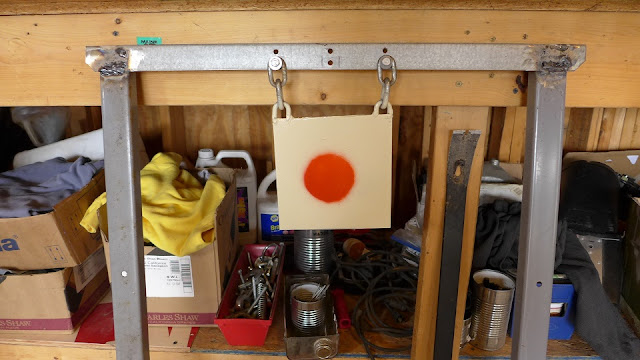 I put it all together . . . then hit it with some spray paint for contrast . 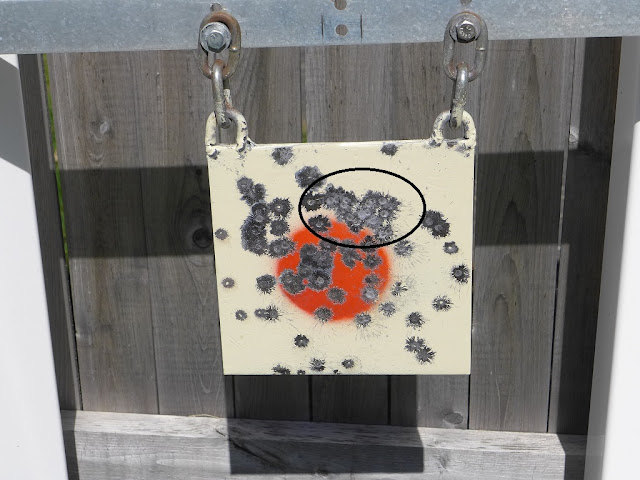 Works real slick , it rings and moves so you know when you have a hit .
With Dad's old Stevens 22 I was doing about an inch and a half group from about 75 feet . 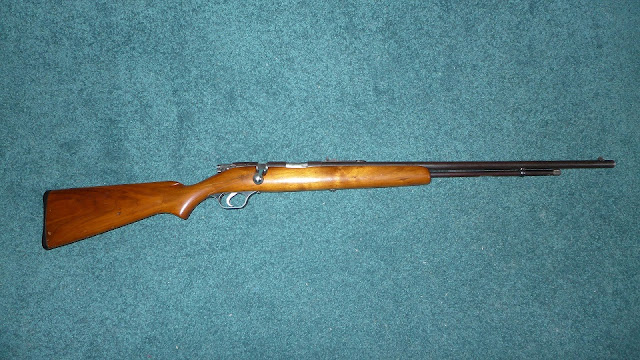 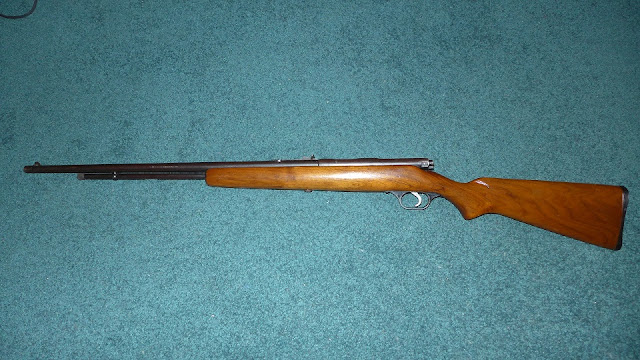 Dad bought it cheap at a pawn shop a few years back . . . 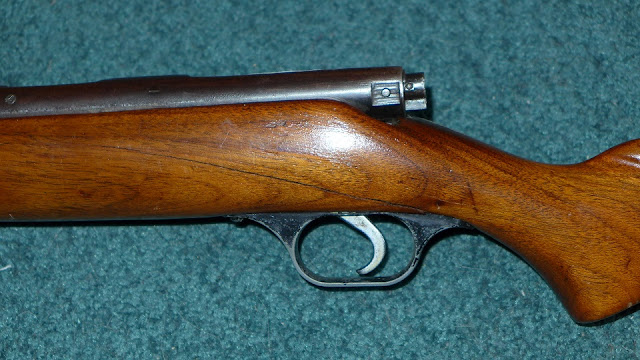 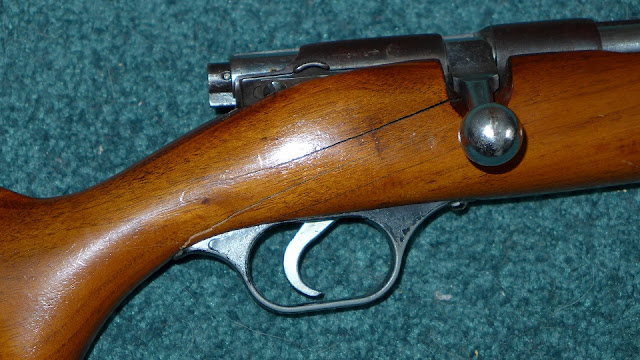 Seems someone thought it a good idea to use it as a club and cracked the stock in the process . 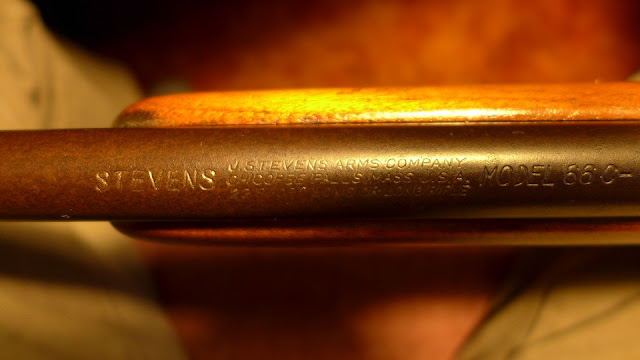 Built between 1931 and 1935 most of the original bluing is gone but the bore is nice and shiny and the edges on the rifling are clean and sharp . 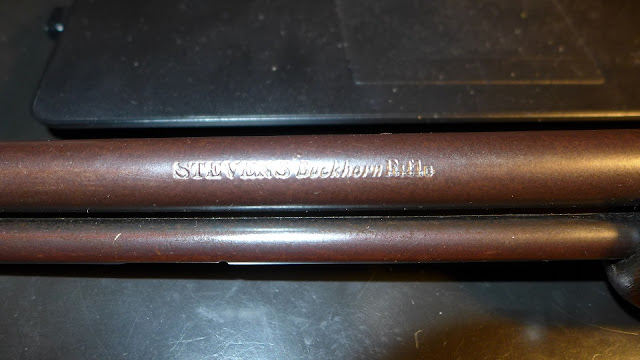 Mr Google indicates the ones labeled as Buckhorn were built of hand select parts and were above average on accuracy . And if my lousy shooting is any indication I believe it . I just can't miss with it . 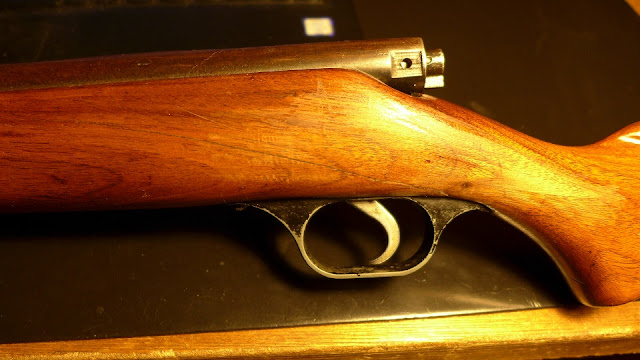 After removing the stock , I mixed some epoxy and thickened it with some wood dust , opened up the cracks in the stock a bit and filled them with the glue . Bound it with some electrical tape and let it sit for a few hours . 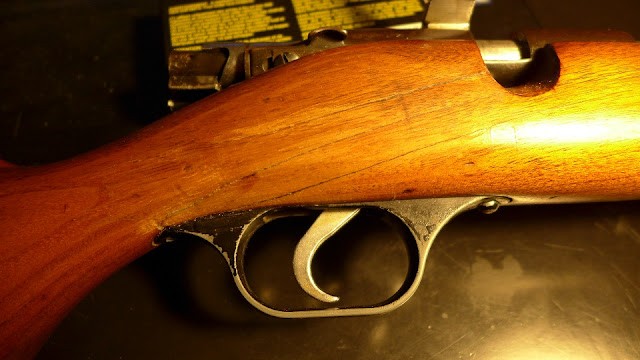 Before the glue was totally hard I scraped off the excess and it is good as new . I'll have to sand and refinish the stock some time .
Posted by Mike Silvius at Sunday, May 21, 2017