As we took last weekend off for other events , Ben and I went up last Wednesday to make some headway on the shed . It was a brutal hot humid 90 degree day with no wind and lots of black flies . 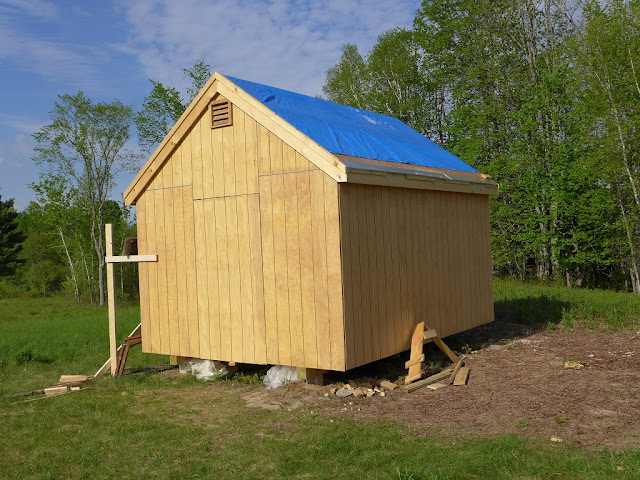 Since the official photographer was not present we did not get any action shots and only remembered to take some pictures at the end of the day . 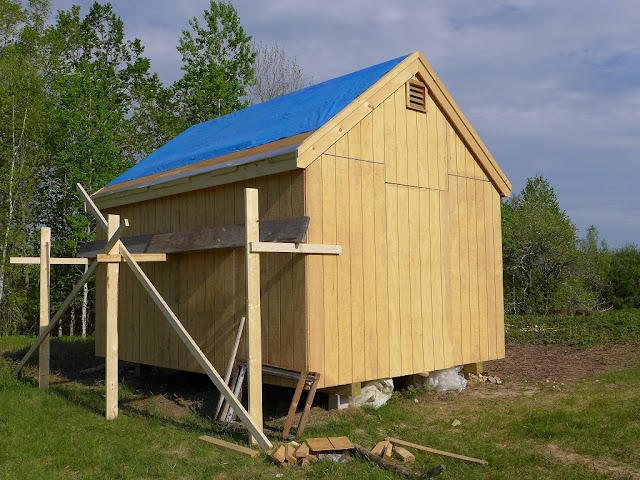 We did manage to set up some staging and got most of the roof trim done in preparation for the shingles . Though we came up short on material for the sub-fascia so I just tacked up some temporary three quarter inch thick scraps so we could get proper spacing on the aluminum drip-cap on the eves . 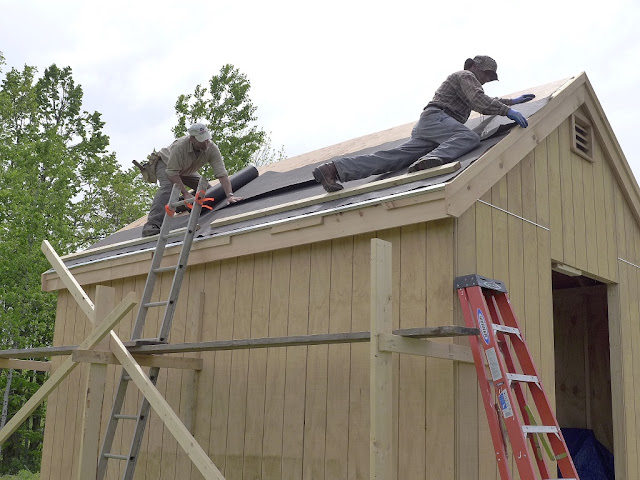 So on Saturday with much nicer weather we got a good start on things . We got some felt paper stapled on and the aluminum drip-cap on the gable end rakes . 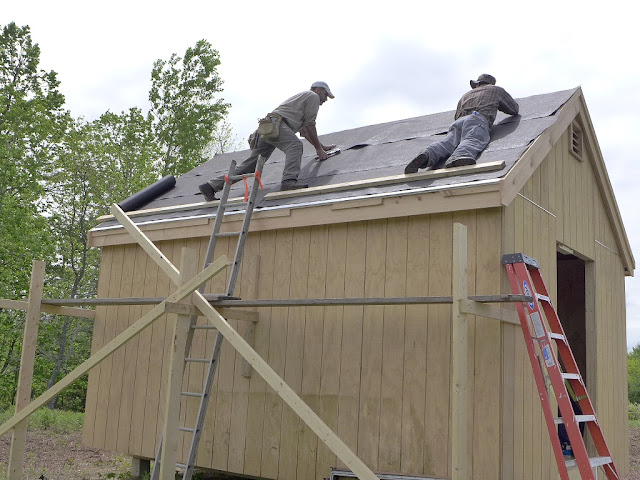 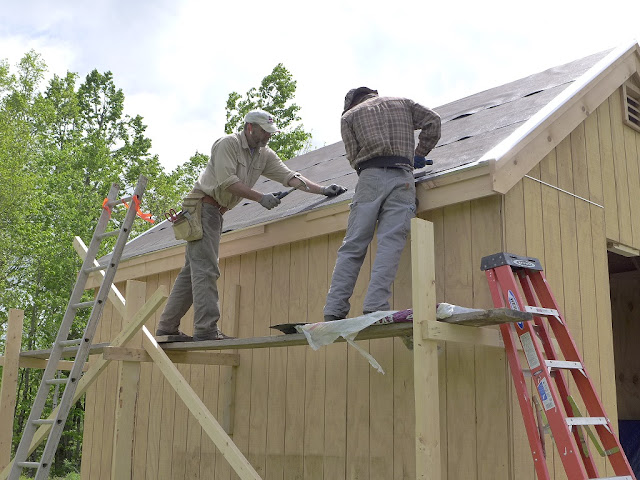 But I got him started on the shingles and left him to it . 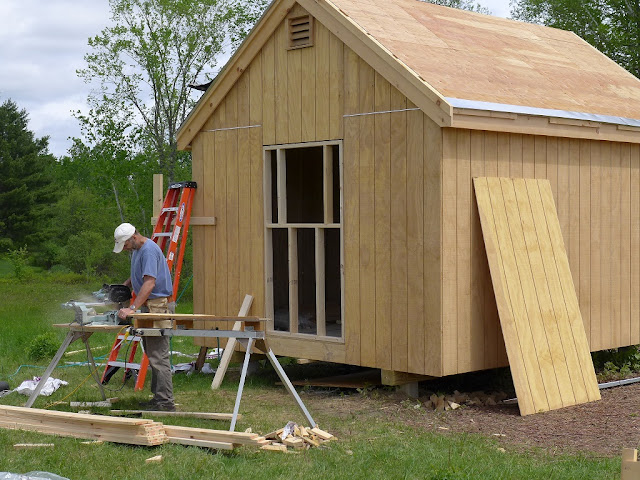 While I got busy building the front door . 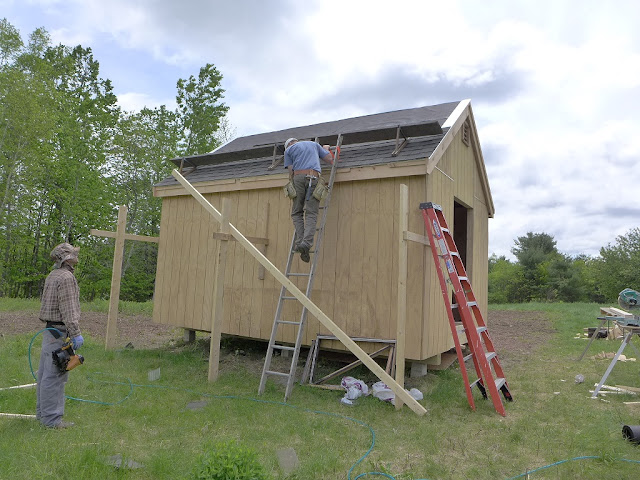 Soon he was high enough to set up the roof brakets and move the planks up on to the roof . 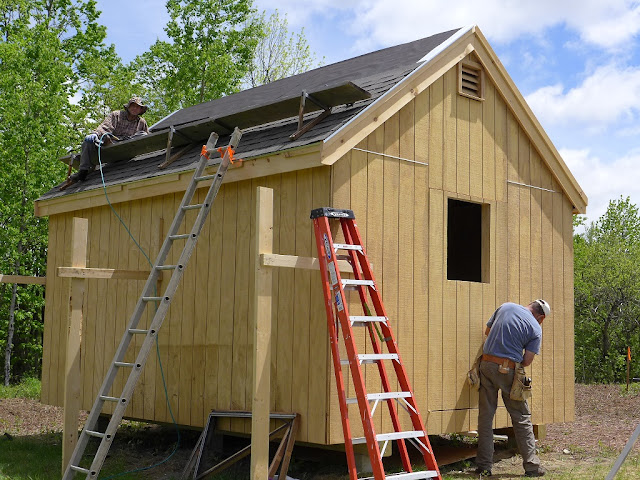 And I sheathed the door . 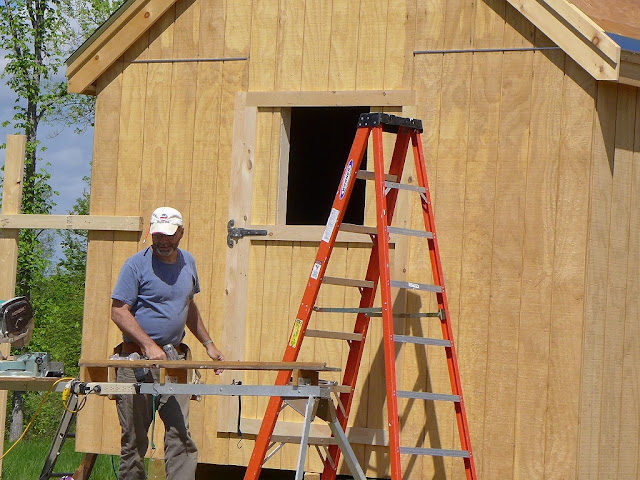 Dressed it up with some trim and fancy hinges . 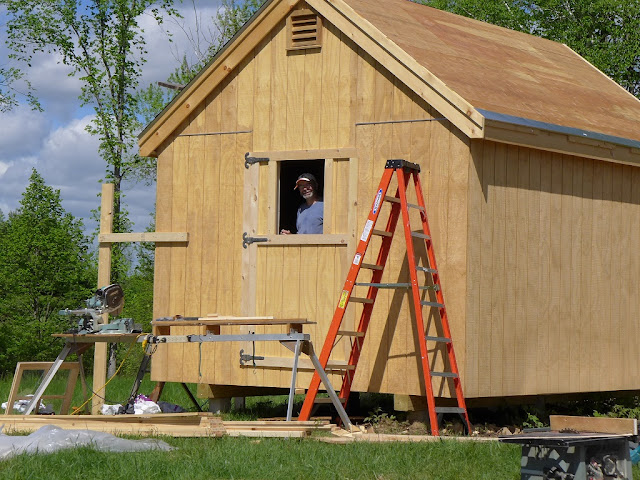 Looks rather horsey to me . 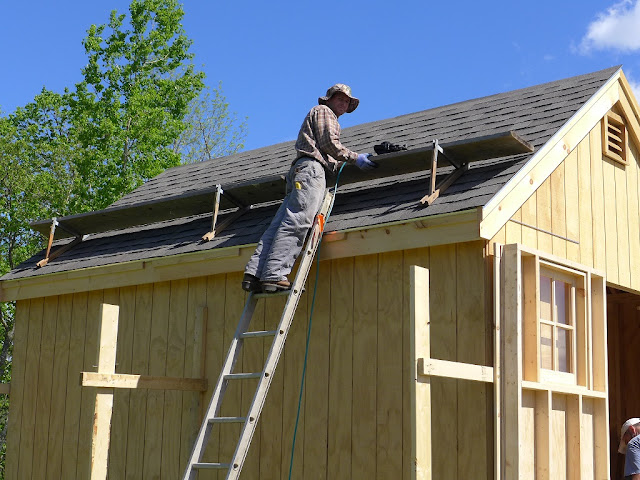 And before I knew it Ben had finished up with the shingles on the first side . 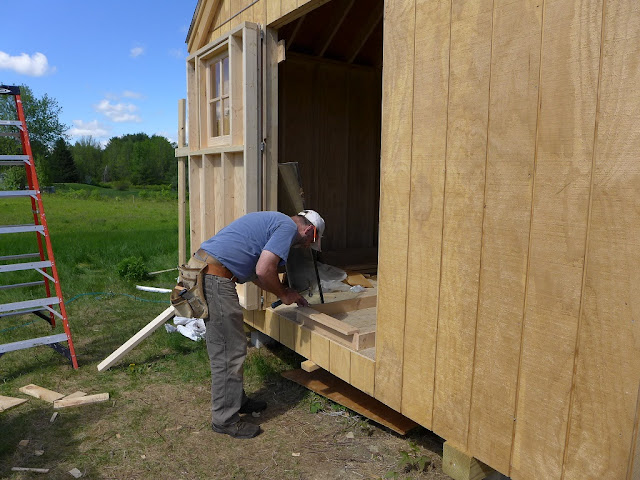 While Ben tore down the staging on the far side and moved it to the right side , I made up a window frame for the back gable end . 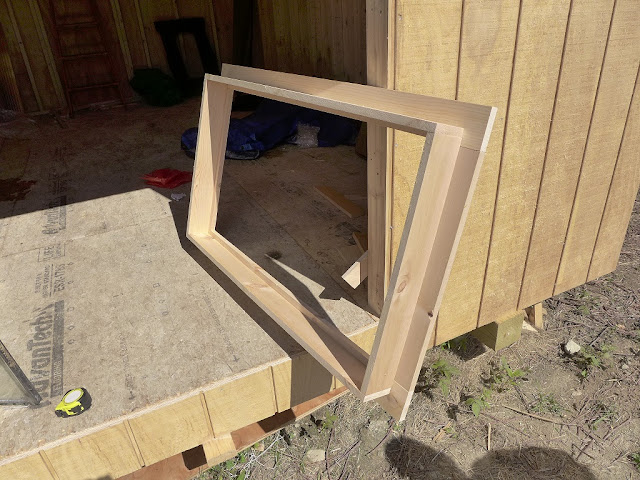 Just a quick and dirty frame to hold the glass we saved from the old salvaged sky-lights . 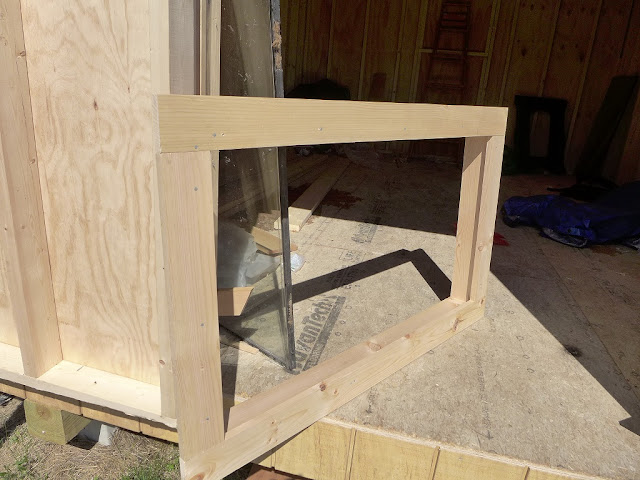 Good enough for a barn . 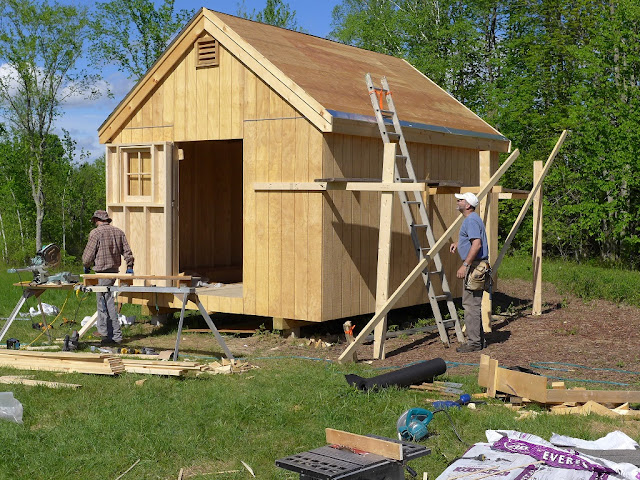 Soon enough Ben had us ready to get started on the second side of the roof . 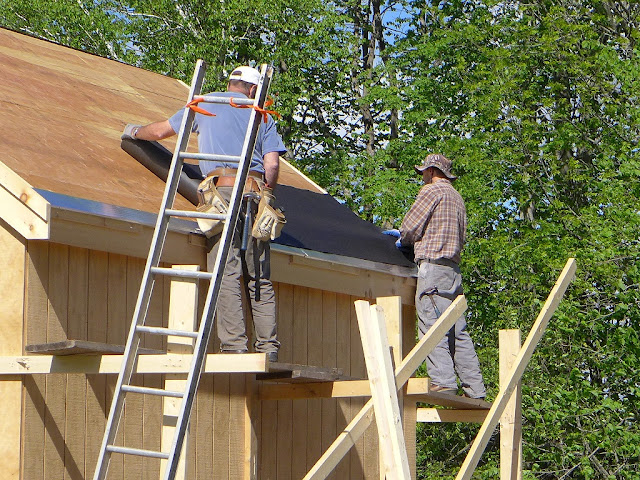 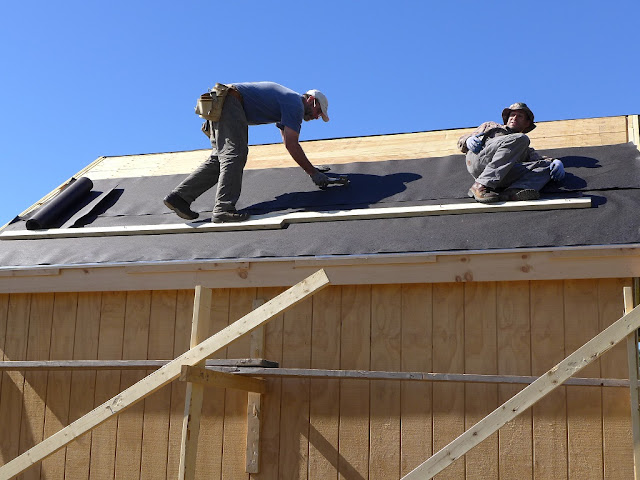 Ben was still shaky on the 2x4 walkers with his hard sole boots . 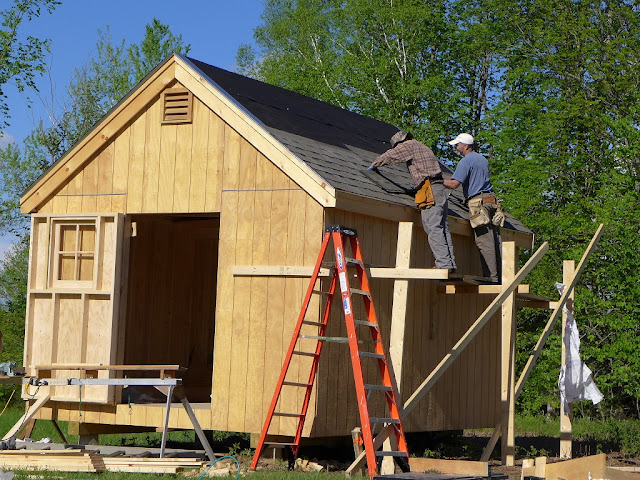 In no time we had put up half a dozen courses . But then the generator ran out of gas to keep the compressor going so that put an end to using the roofing gun . 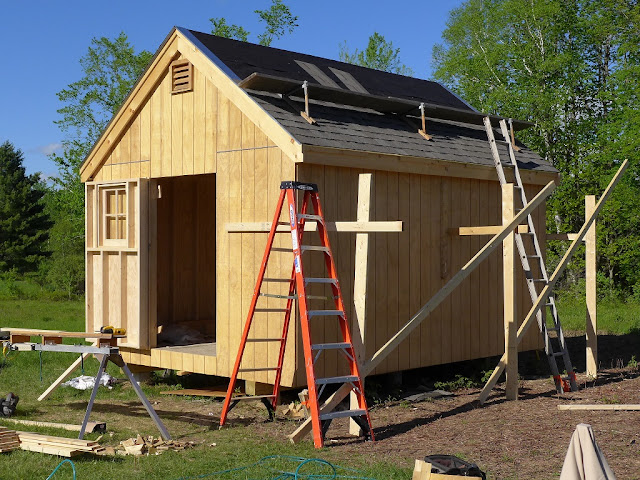 So we set up the roof brackets and moved the planks up on to the roof . 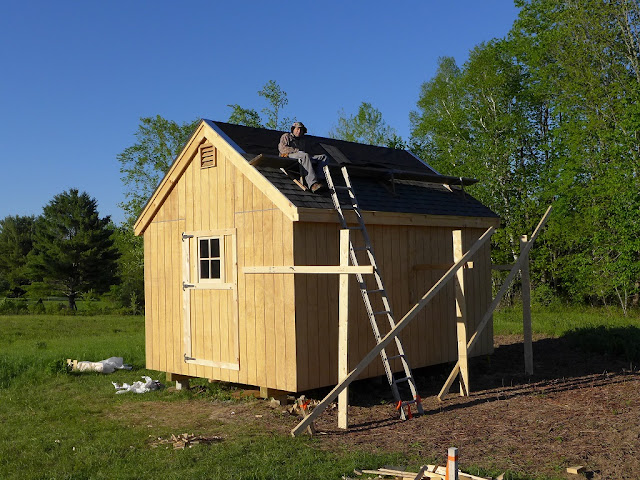 And left Ben to peck away at it with the hammer . 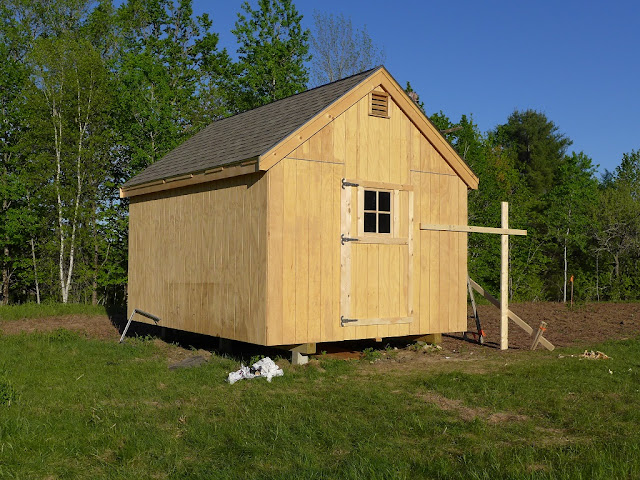 It don't look half bad for a quick and dirty barn . Next chapter we'll finish up the eve-end sub-facia , make a couple more window frames , get those installed and put up some corner-boards .
Posted by Mike Silvius at Monday, May 29, 2017